If you are followers of the blog you will know Ru is a massive fan of the Thomas Tracks and is always over the moon when we are asked to review a new one.

When we were asked to review the new Twisting Tornado Set I was more than keen to say yes.
Ru has been doing really well at nursery and it was nice for him to receive a surprise in the post. 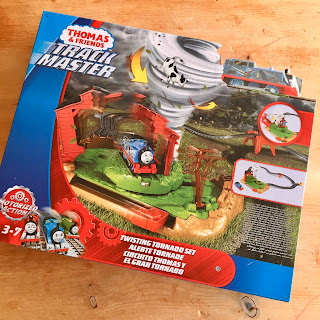 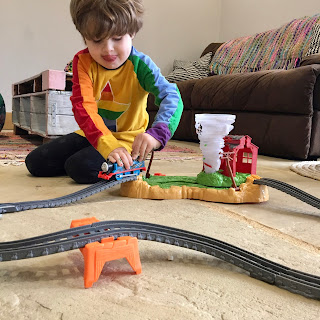 The track was really simple to build, it all clicked together nicely and the track layout was really easy to follow.
Ru sat patiently and watched as I built, once it was ready to go he popped Thomas down and giggled away as he sped off. 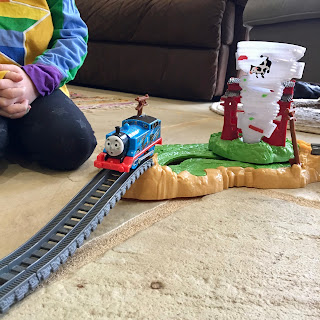 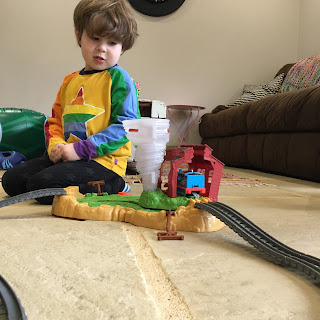 It took a few goes before he realised he had to move the tornado back before Thomas reached it, but once he got the hang of it there was no stopping him.
The race was on to get it back into place before Thomas had zoomed around the track. 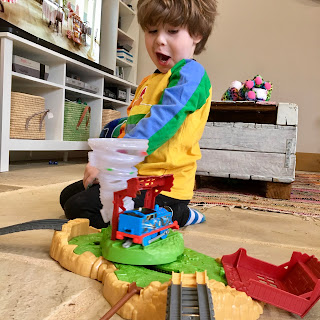 Thomas takes shelter inside the old shed but only to find the Tornado takes him into a whirlwind and spins him across the field knocking down all the powerline poles on its way to the other side of the track.

Fast-paced and full of fun, this is definitely one of his favourite Thomas Track Master sets! 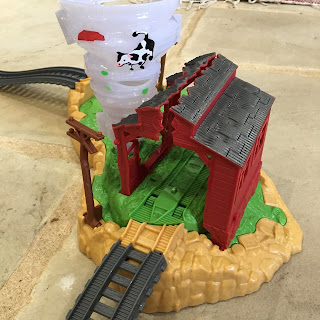 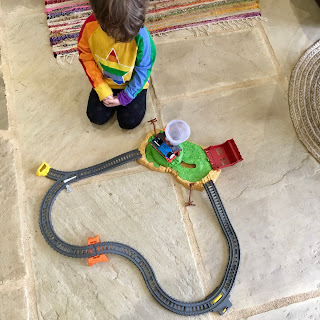 After playing you can unclick the track and place it back in the box.
This track can also connect to other TrackMaster™ playsets for non-stop adventures!
I'd highly recommend this set to any parent with a Thomas fan, it's reasonably priced and will last well and bring endless hours of fun.
You can catch Thomas & Friends over on their YouTube Channel. 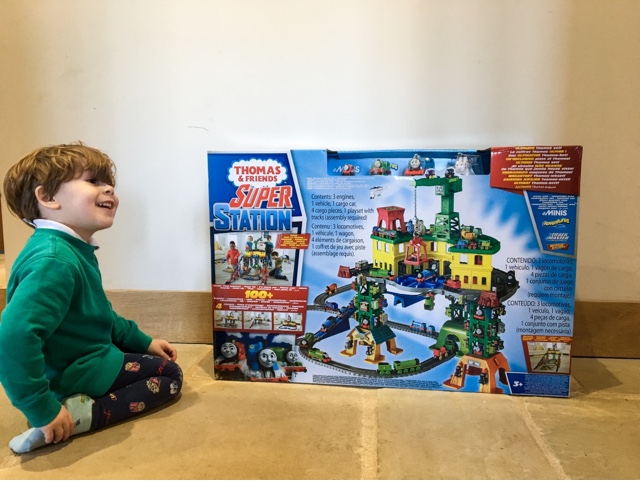 For those of you who follow the blog you'll know how much Ru enjoys all sorts of vehicle toys, his love for his cars is strong but a close second is playing with his Thomas & Friends railway tracks.

He adores watching the trains go round and round - something that I put down to his sensory traits.
Often when he's had a hard day / week the one thing I know that will instantly help is building up a track and letting him slip away into a little Thomas trance.

Watching the trains go round instantly takes his focus and makes him smile!

So when I was asked if we wanted to review the brand new Super Station I jumped at the chance and responded with a yes straight away.

Ru had seen the advert for it on the television and pointed it out to me, something that he rarely does.
So I knew he would love it.

I really wasn't expecting it to be as big as it is, as sometimes toy size can be a little misleading but the Super Station is true to form and it is pretty massive.

It was so big that I had to move it from the lounge half built to the kitchen as I knew it was going to take up far too much room in the lounge.

Something that you can see for yourself in the pictures. 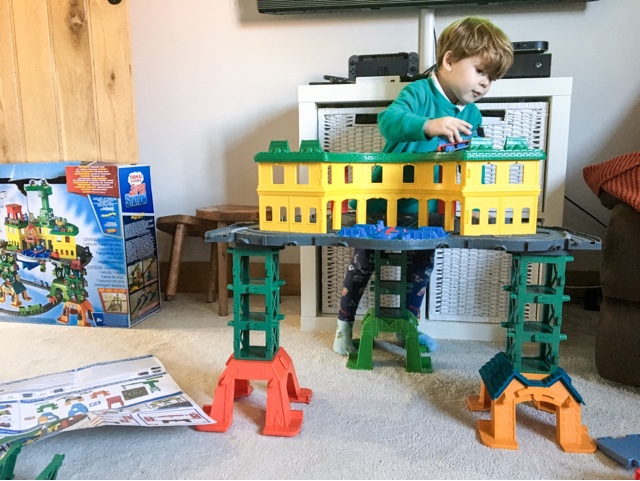 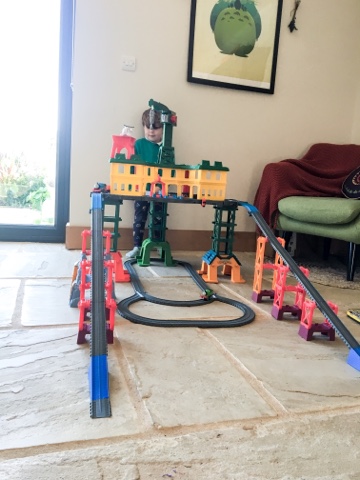 Ru was keen to get playing as soon as I started building and he wouldn't leave me alone until I had placed some batteries inside the TrackMaster Thomas engine.
So whilst I built the track he let Thomas ride around the parts I had built whilst eagerly telling me to hurry up. 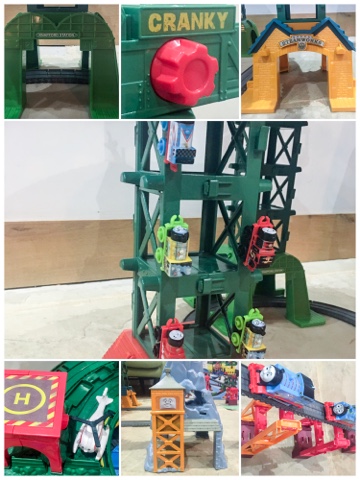 After deciding which track we were going to build first it took me around 20 minutes to build it.
As well as building the track correctly, I took my time making sure the stickers which were supplied along with the instructions were stuck nicely and in all the right places.

Once it was done, even I was impressed by it's size.
Ru was so impressed that he took his time walking around and looking at it taking it all in and whispering 'wow' to himself. 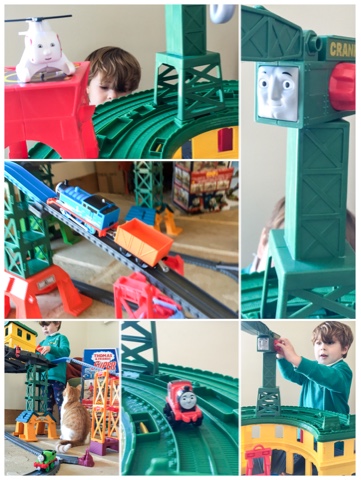 He gets so involved in play that I can actually get stuff done around the house with out him noticing.

I even managed to go to the shops on my own whilst I left him with Jon (something that I can rarely get away with) as he was just so immersed in watching Thomas go round & round and up & down that he hadn't notice me pop my shoes on and head for the door. 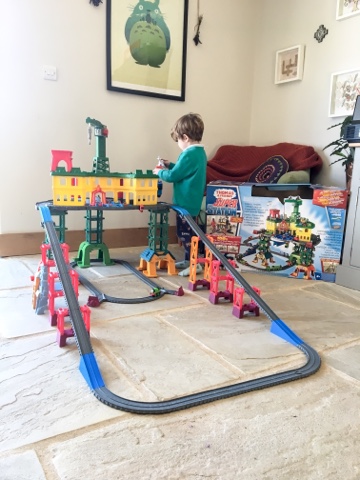 I love how you can store all the different trains on the track, as I'm always finding Ru's MINIs dotted around the house, so its nice that we now have a cool place to store them.
At least now we have all his trains in the one place and I don't have to spend ages searching all the toy boxes for them. 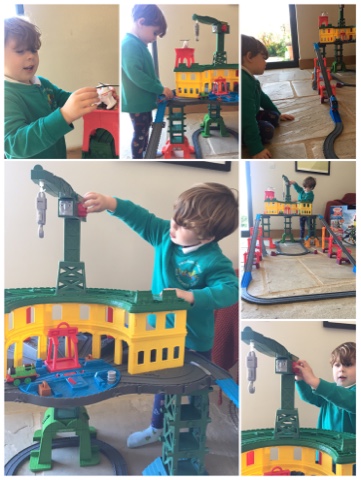 Unfortunately for me the Super Station won't actually fit in Ru's room so it will have to live in the kitchen until Ru allows me to take it down.

Though saying that, I have found myself enjoying making up all the different tracks whilst Ru is asleep to surprise him with in the morning.
It's becoming rather addictive in a way and I have been doing it every night this week! 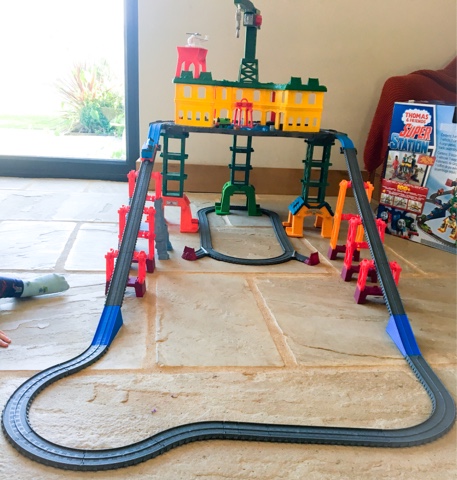 Rupert really adores the Super Station, the twins enjoy a sneaky play and even Noah likes to get involved when Ru isn't looking and as I just said I can't help but enjoy building new set ups!

A definite win for all the Mini Beast crew. 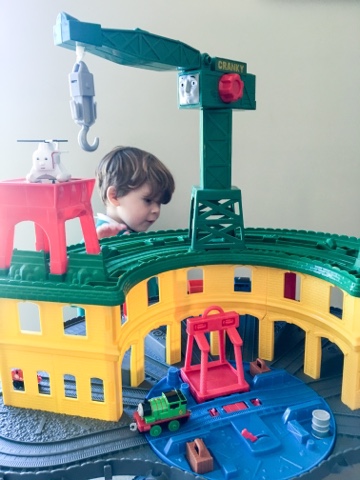 This is definitely one of the top toys for this Christmas and if I hadn't been extremely lucky enough to  be offered the opportunity to review it, it would have been on the top of our Christmas list.

The boys all love Thomas the Tank and were over the moon when this Thomas & Friends train set turned up at the door. 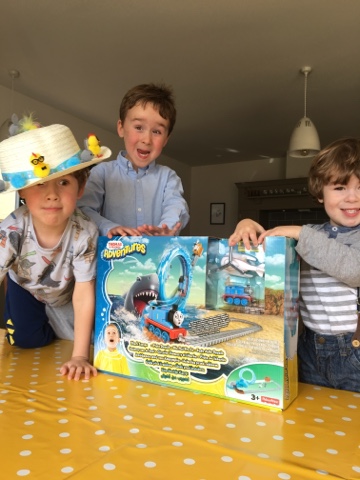 Key features of the product: 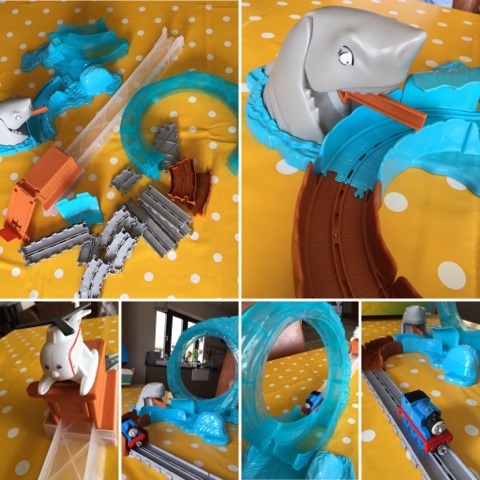 It was nice and easy to assemble and took me about 5 minutes to put the track together.
No batteries were needed which meant play could happen as soon as it was built!
Always a bonus point for the twins!

Before I even had a chance to show them how to do it the twins took over as they already knew what they were doing thanks to seeing an advert on TV.

The twins tried their hardest to show Ru how to get Thomas to Loop de Loop, but he was having none of it and kept opening the crate before the ramp was fully lifted in the air.
Which resulted in Thomas just making it to the start of the loop. 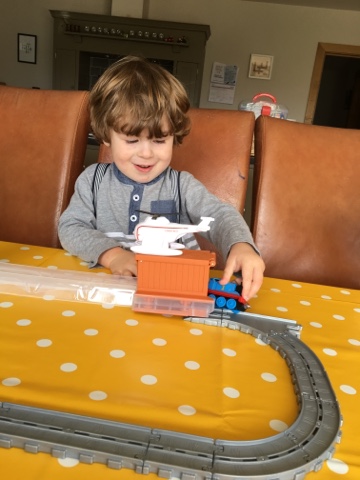 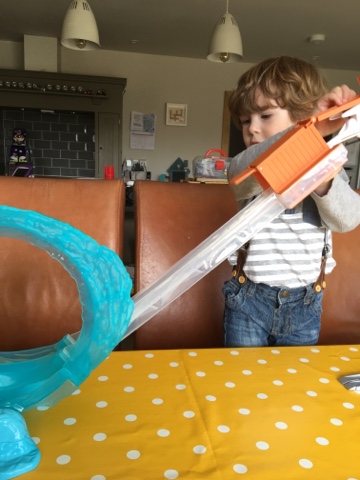 When he eventually let the twins have a go, they showed him again and eventually he got the hang of it. 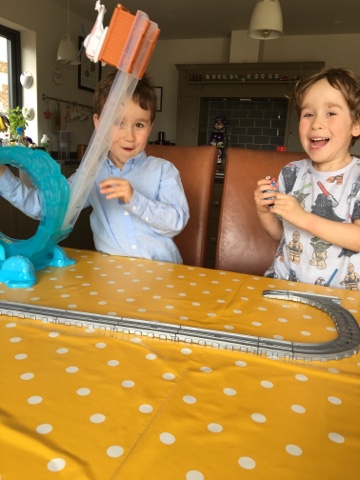 Watching Thomas loop de loop all sent them in to giggling fits and they were sure the shark was going to get him.
I think they secretly wanted Mr Shark to chomp on him every time!
A few times the shark won but the other times Thomas was way to fast for him. 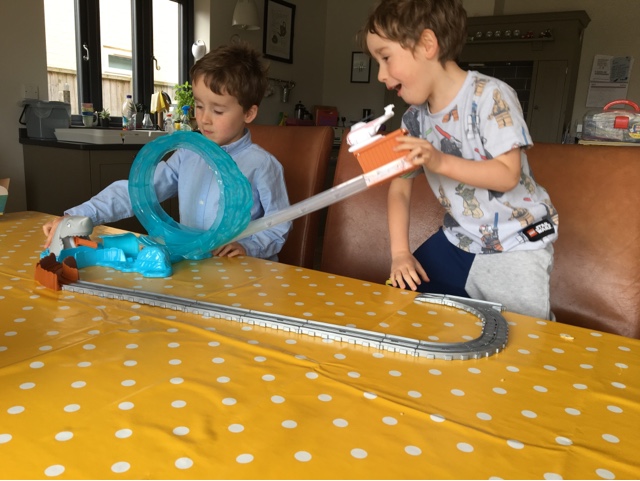 The twins played really nicely together and even made a little game that involved Harold leaving the crate and coming to Thomas's rescue. 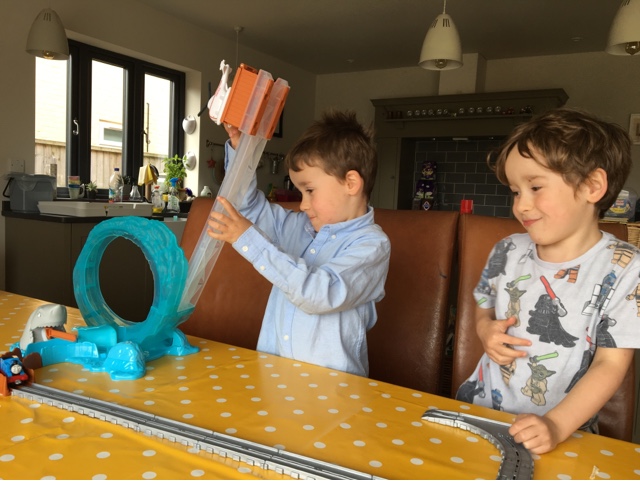 This would make a wonderful present for any Thomas Fan. 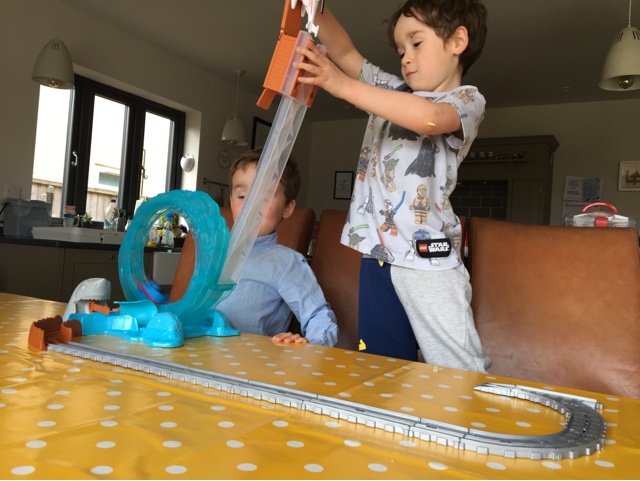 With Christmas just around the corner....yes I know I said the C word.
I thought I'd share with you this very cute musical Thomas the Tank. 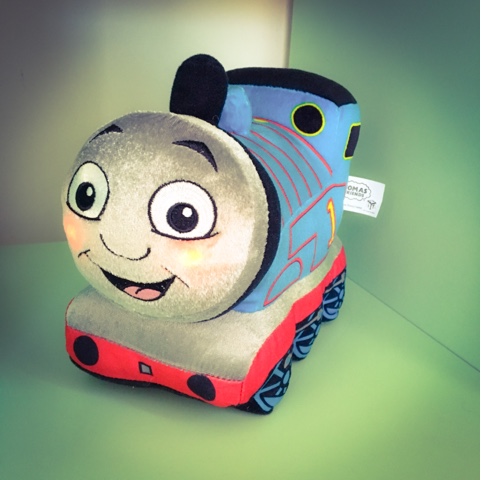 'The iconic Thomas theme tune plays when you give Thomas' blue dome a squeeze.
As the music plays his cheeks softly glow in different colours, adding some magic into everyone's favourite engine. Thomas' iconic sounds also play with a squeeze of his black funnel.
Glowing Musical Thomas is made with super soft fabric and is the perfect cuddly companion for little ones.' 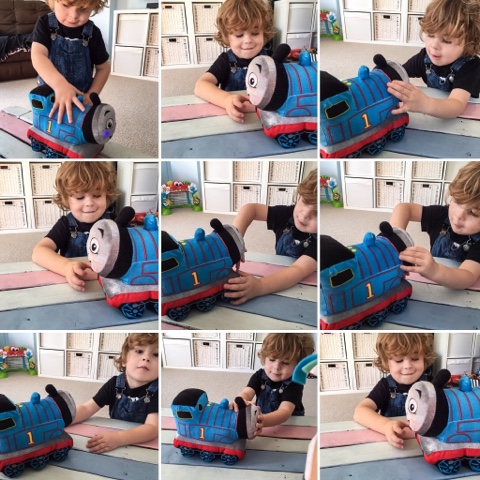 Rupert loves his Light up Thomas and has been having great fun sliding him up and down the coffee table and taking him on daily adventures.

Thomas is super soft and he often finds his way to Ru's bed come bedtime.
No matter how many time Ru plays the Thomas theme tune his face always lights up with Joy when he presses the button.

This would make an excellent gift this Christmas. 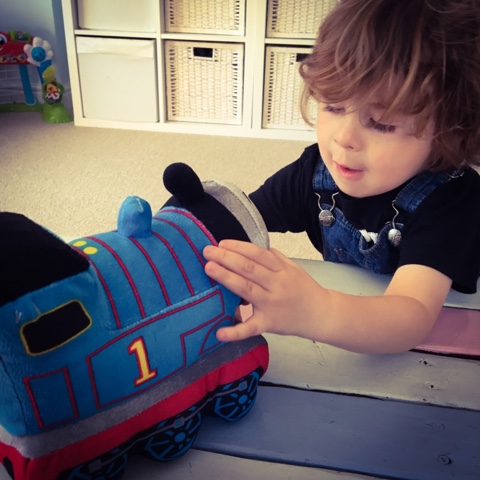 Fancy winning one?
Why not enter the Rafflecopter below.

Giveaway will run for 2 weeks.
The winner will be picked at random.
UK only
The prize will be sent from Golden Bear Toys PR.
I will email the winner and they will have 24 hours to respond before another winner is picked.

You can also purchase Thomas from Golden Bear Toys for £24.99