Last week we headed off for railway adventure!

We got on a Greater Anglia train at Sheringham and headed to Wroxham, where the Bure Valley Railway is. 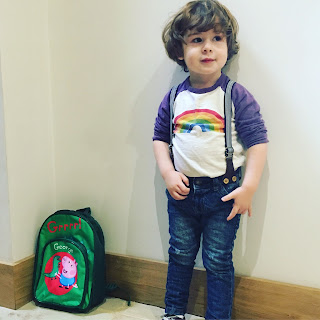 Ru hasn't been on trains much, so it was all very exciting for him.
It was also great for Jon and I too, as since moving to Norfolk we haven't actually seen a great deal of the gorgeous country side.
So sitting on the train to Wroxham meant we could sit back enjoy the ride and take it all in. 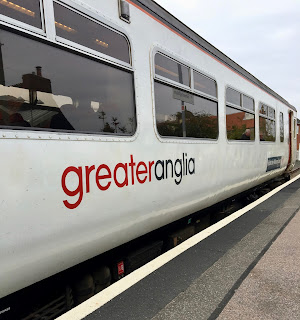 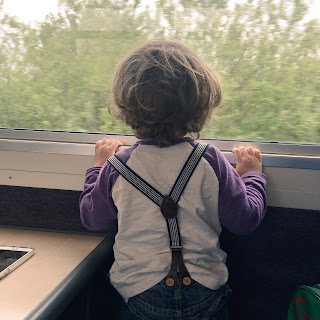 Once at Wroxham we walked round to the back of the train station to the Bure Valley Railway.
We were greeted in the station shop with our tickets.
The staff were very helpful and pointed out each bit of our adventure.

We were booked on the 11.10 train to Aylsham, where we could have a quick bite to eat before heading back on the 12.40, so that we could get over to the Broads for our 2 hour boat trip. 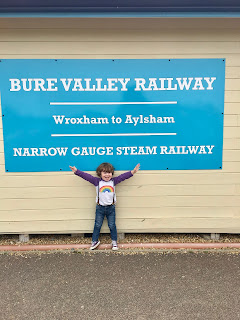 The Bure Valley Railway is a major tourist attraction within Norfolk and welcomes over 100,000 visitors a year.
With a small team of dedicated staff and volunteers the railway operates on a not for profit basis. Husband and wife team, Andrew and Susan, head up the management team.
Andrew’s love of railways from a little boy drew him to Norfolk and he became involved in the railway as a volunteer in its infancy and subsequently gave up his job in London a few years ago to work at the railway full-time.

The Railway is built on the trackbed of the former Great Eastern Railway between Wroxham and Aylsham.
Originally opened in 1880 the line survived for passenger traffic until 1952, eleven years before the infamous Beeching Report!
The line did, however, survive for the purpose of carrying freight, a role it performed until the line was formally closed by British Rail in 1982. 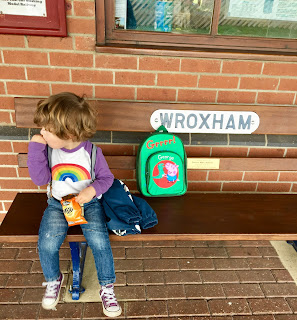 Ru cracked into a pack of mini cheddars whilst waiting for the steam train to arrive.
Once he heard the whistle blow he was off the bench looking in all directions for what had caused the noise.

The moment he saw the train in the distant he stuck his hand out flagging it down!
He then jumped around the platform with excitement. 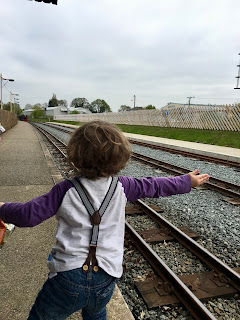 As the train got closer you could see the smile spread across his face, he's never seen a steam train before and had no idea what we were about to do but you could see he was loving it already. 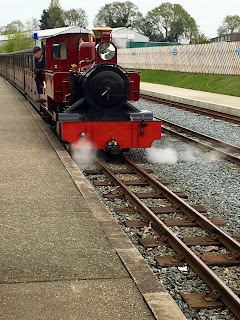 We got on the very first carriage and were able to watch the locomotive attach itself back to the carriages and prepare for the next journey.
It was all really fascinating and Ru for once in his life actually stopped and took it all in.

Once we'd set off Ru was bouncing all over the place with excitement.
Looking out all the windows and waving at people we passed. 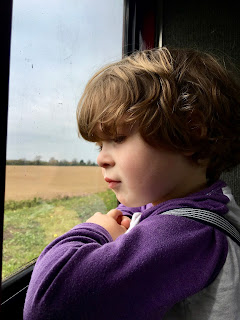 The views from the train were stunning and we saw lots of farm lands and some very beautiful houses. 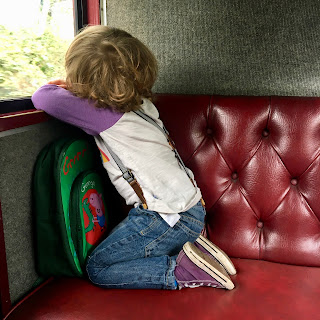 The excitement all got a little too much for him and he had to have a quick power nap. 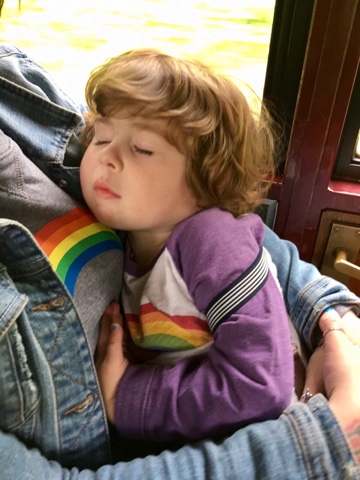 Once off the train at Aylsham we found a little G scale Thomas The Tank!
Ru would have happily stayed there for the rest of the day pressing the button to make him, but we were hungry and it was starting to rain so we managed to pull him away into the cafe. 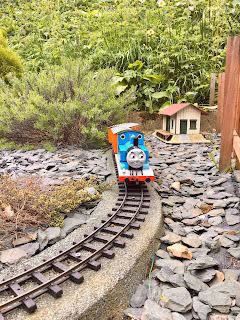 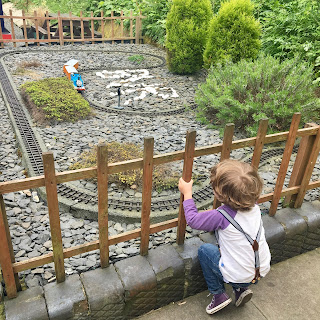 Everything in the cafe was reasonably priced and again the staff were all very friendly and helpful.

After lunch Ru decided he wanted a play on the pretend steam train which doubled up as a picnic area, as before when he spotted it he was still slightly grumpy from waking up from his power nap. 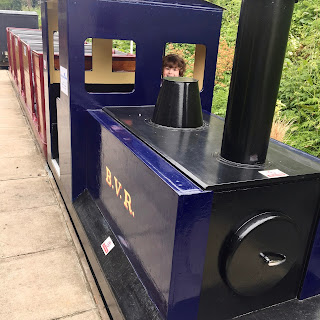 He made up sit on the back and drove us to the moon and back, then it was my turn to be the driver.
After a short play it was time to get back on the train. 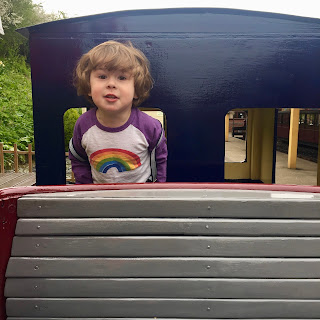 After we arrived back at Wroxham we headed off into the town to hunt down our boat.
It was a 15 minute walk, so Ru jumped on my back and we decided to follow some people who got off the train before us as they looked like they knew where they were going.
Lucky for us they were going to the same place we were going or only god knows where we could have ended up.

Once at the docks, we boarded our boat the Belle of the Broads and sat downstairs, as all the seats on the upper deck were taken.

I thought the boat trip would be the highlight for Ru, but he found it so relaxing that he slept on me for the whole two hours we were on board! 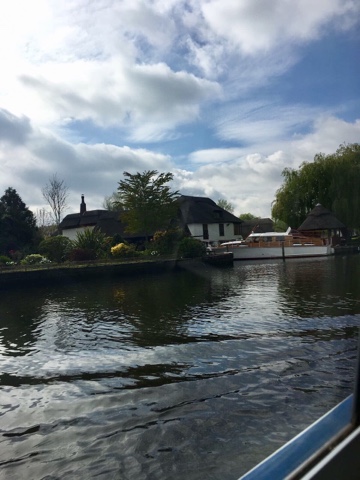 In a way it worked out for the best, as Jon and I were able to take in everything the guide was saying and enjoy a coffee without having to make sure Ru was entertained. 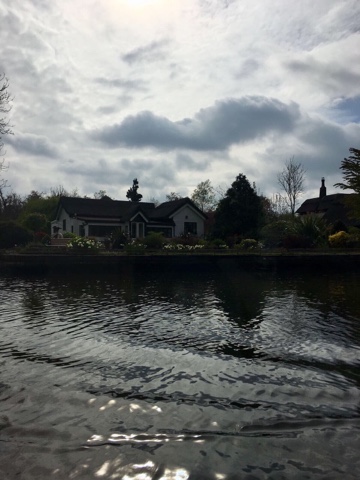 We saw some beautiful sites and found out a lot of things we didn't know about the broads.


It has made us keen to return for another trip.

On board they had handy children activity packs, which a lot of the kids on board were doing.
They were all on the hunt for different sorts of birds and wildlife.
I know if the twins and Noah had come along they would have loved that.

Every time you passed another boat everyone waved at each other, it seemed as though it was the law of the broads!
It was fun and you could tell everyone there was having fun. 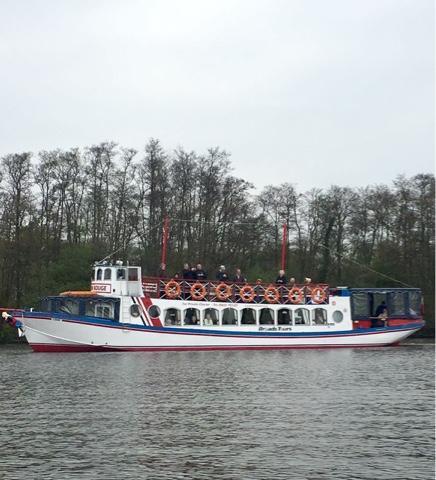 We had an absolutely lovely day and were all extremely tired by the time we got home.
Everything went to plan and all 3 of us had a fab time.
We can't wait to go back with the other 3.
Ticket Prices:

To find out more visit the Bure Valley website


Greater Anglia Children's tickets are £2, wherever and whenever you travel.
You don't need to buy them in advance either!

Below is a little video of Ru enjoying the ride on the steam train.

** we were gifted tickets for the purpose of this post.
Please answer this quick question about this article.
If you can’t see it, please go to https://www.surveymonkey.co.uk/r/JZSKS8J Create your own user feedback survey
No comments:
Email ThisBlogThis!Share to TwitterShare to FacebookShare to Pinterest
Labels: #Aylsham, #broadstour, #burevalleyrailway, #Norfolkblogger, #Norfolkbroads, #Norwichblogger, #railadventure, #steamrailway, #thingstodoinNorfolkwiththekids, #ukparentblogger, #visitnorfolk, #wroxham
Older Posts Home
Subscribe to: Posts (Atom)