Last week was British Science Week and to celebrate the last day of it, we brought Science into the home with the help of John Adams Booms, Bangs! Fizzes explosive messy science set!

'Booms Bangs and Fizzes, a totally cool science set that allows you to create a whole heap of noisy, messy, bubbling, fizzing, explosive experiments in your home.
Have loads of fun whilst learning about the science of why things explode, froth and make loud noises.' 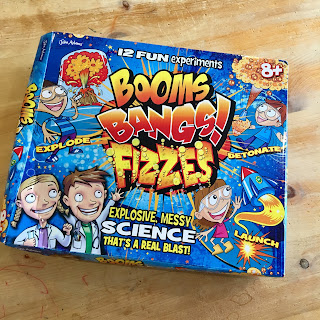 The set has 12 fun experiments to try, there's an experiment to suit everyone.


The set includes all the important bits you need for those experiments with just a handful needing a few extras that you'll be able to find around the house.

I had planned to get the boys in the garden and let them loose on some of the messy experiments but unfortunately, it snowed again and was ridiculously chilly, so we stayed inside and picked a few of the non-messy ones.

Our first one was Indoor Lightning. 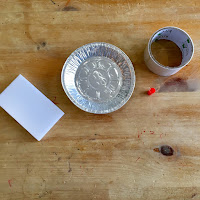 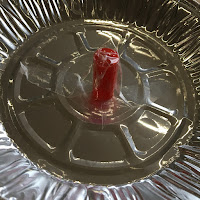 For this, we just needed a pen lid and some sticky tape.
The lid is to make a handle for the aluminium tray.

You have to rub the Lightning Styrene Sheet on your hair really fast then drop it on to the carpet, then from about 30cm, you drop the tray onto it.
Then you place your finger on the tray, without touching the Styrene sheet and you should hear a crackle and feel a slight shock.

We did this a few times and found that it only really worked on Oscar's hair. So he turned into our rubber!

Once we had all felt the mini shock we tried the next step trying to see the lightning... 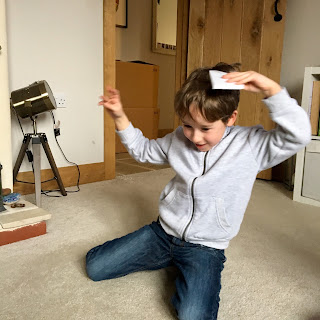 To do this you are meant to repeat the rubbing of the Styrene sheet and dropping it on the carpet then picking up the tray by the pen lid handly then very slowly bringing your other finger towards the sheet.
You should then see a lightning spark and hear a crack.

Unfortunately, we didnt see any lightning but we did hear the crack.
The boys were all really impressed with this, and still very desperate to make their own lightning.
So this will be an experiment we'll be trying again! 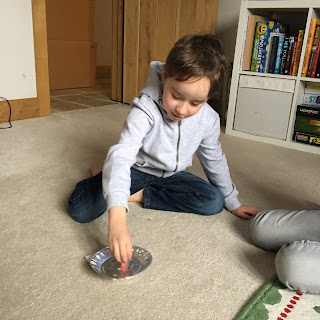 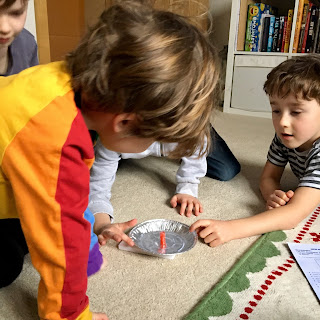 Our next experiment was Jet Engine Balloon Screamer.

Everything needed for this experiment was included in the pack, we just had to make up the rocket!
The boys all helped with the making of the rocket and setting up the chairs.
I was only going to do a short distance between the two chairs, but they decided it would be better if we did it the whole length of the kitchen.

We enlisted Daddy to lend a hand so I could get the picture of the rocket in action.
Our first attempt didn't actually manage to do anything but make a noise.
So after a little pep talk from the boys, Daddy blew the rocket balloon even bigger and then picked up one chair, so that it was at a slight angle to the other.
And whooooooooosh the Rocket was zooming across the kitchen.

The boys all giggled with delight. 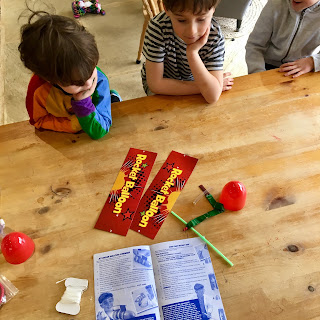 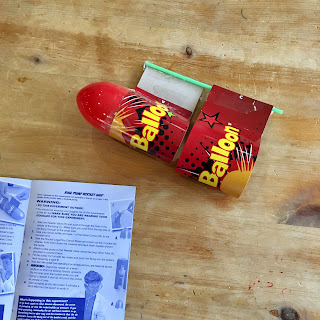 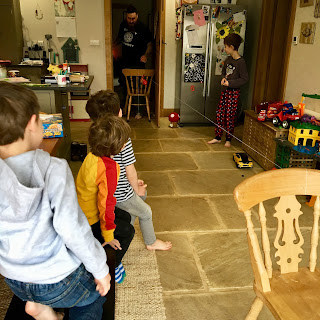 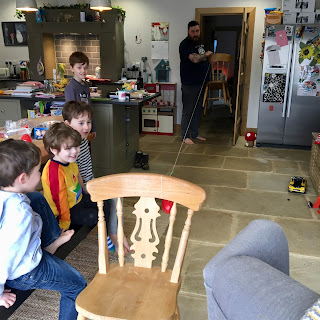 Our last experiment was the Paper Banger.

Again this was included in the set and all you have to do is some fancy folding and then BANG!
I discovered I have pretty weak arm strength, so I couldn't actually get the thing to bang, so Daddy was called back into the kitchen and he showed the boys what it really could do. Their faces were priceless.
It made a pretty awesome Bang!
Jon did it a few times but in the end got a bit carried away and did it too hard, it actually ripped the paper. 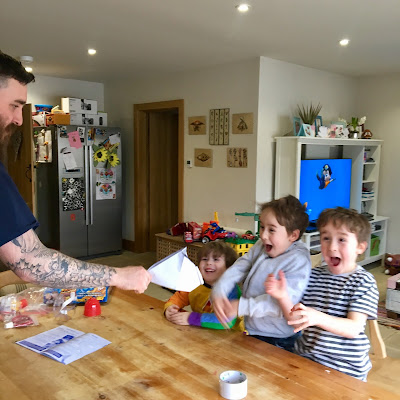 We all really enjoyed our mini science morning in the kitchen and can't wait for the weather to warm up so we can get in the garden to do some messy experiments.

Boom, Bangs! Fizzes is recommended for ages 7 upwards.
RRP £19.95
You can buy it on Amazon 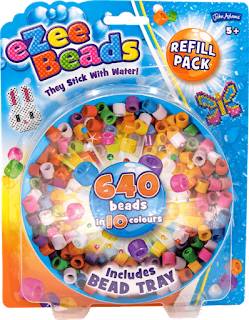 The eZee Beads Refill Pack includes 640 beads in 10 colours!
Use the extra beads to make more amazing eZee Beads creations.
Includes a handy tray to sort your beads into colours. 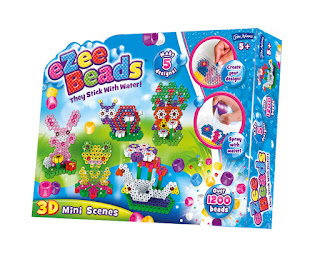 eZee Beads 3D Mini Scenes (SSP £14.99)!
With five innovative 3D designs and over 1,200 beads, the 3D Mini Scenes set allows you to make a range of colourful animals including an owl, duck and ducklings, snail, cute rabbit even a frog on a lily pad!

I recently reviewed the eZee Beads 3D mini scenes kit, if you missed it you can check it out here.

To enter the giveaway just click on the rafflecopter widget below!
Good Luck.

T&Cs
Winner will be picked at random
PR company will sort out the prize to be sent off,
Winner will have 48hr to reply to the email before another winner is picked.
UK only
Ends - 21.2.18
No comments:
Email ThisBlogThis!Share to TwitterShare to FacebookShare to Pinterest
Labels: #3dminiscenes, #artsandcrafts, #celebrate, #eZeeBeads, #fun, #giveaway, #johnadamstoys, #mummybloggers, #mumofboys, #nowonsale, #refillpack, #Toys, #ukparentbloggers, #win

My 3rd instalment for the John Adams Craft Club and this time its for 3D Mini Scenes with eZee Beads. 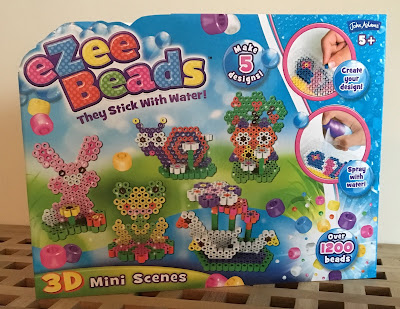 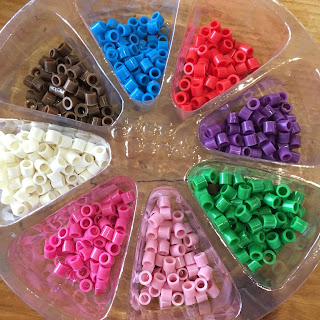 I decided to sit down with Ru after nursery whilst all the other boys were still at school and design our first ever 3d mini scene.
I let Ru pick which design we would do and he chose the cute little bunny.
The thought of making a pink bunny made him very happy and he sat there clapping whilst I sorted out all the beads into the bead storage pot. 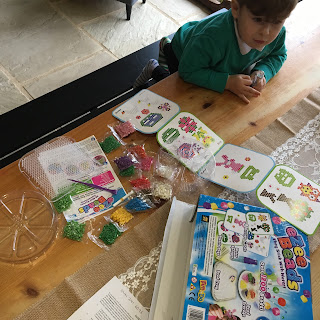 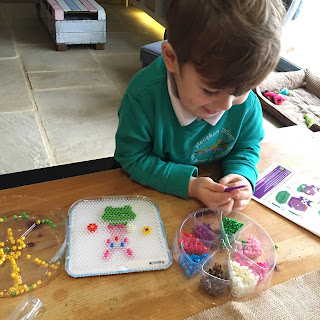 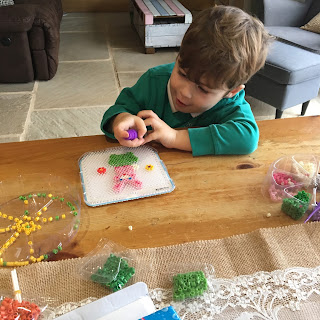 Once the beads were all in a separate section we started on our design, Ru would get the right coloured bead and hand it to me.

Occasionally he did place the bead but he seemed to enjoy picking out the beads and watching me do the hard part.
We started with the green base and worked up, making sure all the beads were down before we sprayed them with water.

Once Ru had made sure every bead was covered in water we made our flower stalk using the bead pegs provided.

After spraying the beads with water it is recommended you leave them to dry for at least 30 minutes.
We left ours for around an hour and by that time it was really easy to peel the design away from the bead board. 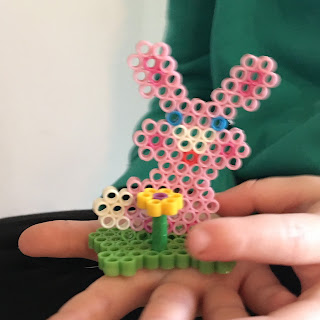 Once the design was dry and peeled off the board Ru watched me turn it from a flat design into a 3D mini scene and he was more than impressed.
He was beaming from ear to ear and couldn't wait to hold his little pink bunny.

Both Ru and I were very pleased with the outcome and we can't wait to make more! 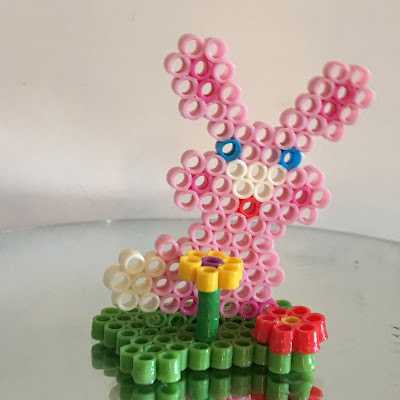 eZee beads 3D mini scenes would make a super Christmas present.
You can find it in Tesco
RRP £14.99.


Have you checked out the JA Craft Club's Facebook page yet?
It features lots of craft tips/ideas, competitions, reviews and a whole lot of other fun things.
Why not check it out here!
No comments:
Email ThisBlogThis!Share to TwitterShare to FacebookShare to Pinterest
Labels: #3dminiscenes, #afterschoolfun, #artsandcrafts, #artyfun, #eZeeBeads, #JACraftClub, #JohnAdams, #johnadamstoys, #mummybloggers, #Norfolkblogger, #preschooler, #review, #ukparentbloggers
Older Posts Home
Subscribe to: Posts (Atom)