We are so excited to be going along to Camp Bestival and our excitement grows every time a new act is announced!!!

I'll be entering Jon into the beard competition even if he's already said he's not going to let me,as well as getting all  the boys to take part inthe fancy dress parade!!! 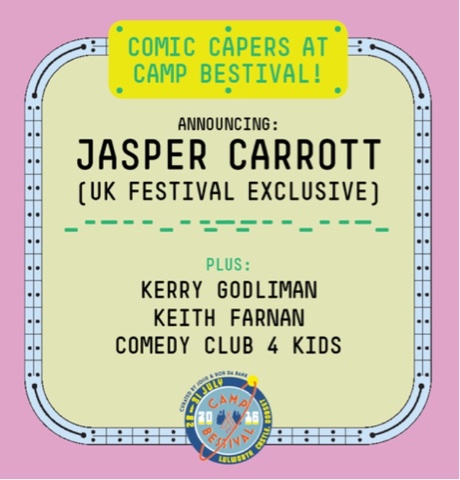 GET READY FOR COMIC CAPERS


AND FAMILY FUN AT CAMP BESTIVAL!


SUNDAY AFTERNOON COMEDY FROM THE LEGEND THAT IS:


AND SHOW OFF YOUR SPACE STYLE AT:


There will be guaranteed laughs aplenty this July when we head into Outer Space at Camp Bestival, as we reveal that one of the country’s all-time great comedians, Jasper Carrott, will be joining us as our astronomical comedy headliner. Plus, we’ve got news of a whole galaxy of family entertainment in the Big Top and bounteous trolley-pimping, beard sculpting and dressing-up delights throughout the weekend, all in the idyllic surrounds of Lulworth Castle on Dorset’s historic Jurassic Coast.


Rob da Bank says: “We all love a curveball and wow we just announced Jasper Carrott for Camp Bestival! I grew up watching Jasper on TV, so that means a lot of you mums and dads probably did too, and if you did you know he’s a comedy legend that is going to make us all laugh ourselves into outer space…quite possibly. See you there!”


Jasper Carrott says: “I’ve heard all about Camp Bestival and what a great family festival it is, so I couldn’t be happier to be heading down to Lulworth Castle to have some fun in the fields, telling a few stories and singing a few songs for you all on Sunday in the Big Top.” 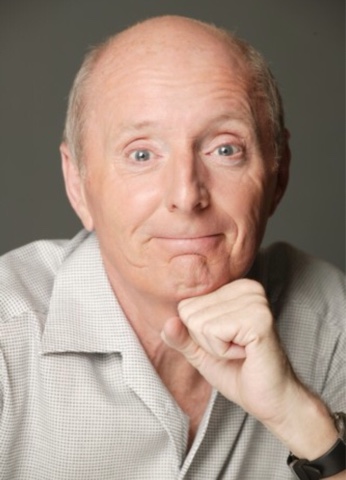 He’s one of the UK’s greatest ever comedians, so we are utterly ecstatic that Jasper Carrott will be joining us for a comedy special in the Big Top on Sunday 31st July. A pioneer of observational comedy, Jasper’s five-decade-spanning career has seen him play to sell-out crowds across the world, front numerous TV shows, including Carrott’s Lib, Carrott Confidential, The Detectives and Golden Balls, among many others, and release several much sought after comedy albums brimming with his infamously risqué songs, including the much-loved Magic Roundabout and Funky Moped. A bona fide legend, Jasper’s Sunday afternoon set in the Big Top will be simply unmissable.


There will also be artful, satirical support on Sunday from acclaimed comedian, Keith Farnan and star of ‘Live At The Apollo’ and ‘Michael McIntyre’s Comedy Roadshow’ Kerry Godliman, who recently appeared as Hannah in Ricky Gervais’ sitcom ‘Derek’. And that’s not all, as we’ll have the totally ace Comedy Club 4 Kids showcasing some dashing youth-based hilarity on Friday and Saturday too


And Robbie Rotten added: "If you want a show, I’ll give you a show…Robbie Rotten style!  It’s disguise time!”


There’s a plethora of heavenly Big Top joy for all the family throughout the weekend too, including two appearances of Aliens Love Underpants, who will be heading straight for our Big Top universe with their zany and hilarious tale on Saturday and Sunday, following their main stage appearance on Friday. And don’t miss amazing entertainment from London Contemporary Voices Choir: ‘Space Junk’, Royal Albert Hall’s Albert’s Band, West End Kids, Funky Little Choir, The Steelers, and the BRIT School, all hosted by ace Camp Besti-fave Arielle Free.


We’re absolutely delighted to announce that we will have a very special sing-along session for all the family, journeying through the songs of Disney with Fascinating Aida’s Liza Pulman. A guaranteed smash, get into the Big Top early for this one! See you down the front.


On Saturday at 11.30am on the Catwalk in the Lower Kids Garden we’ll have our incredible Beard & Moustache competition where you’ll be able to captivate the audience with your flocculent facial sculpture and bedazzle with your bushiness! So come along and let us fondly hurrah at your hirsute and fleecy face!


Hot on the Beard & Moustache competition’s hairy heels will be our legendary Pimp My Trolley competition. Always a truly dazzling spectacle, this year, with Outer Space-inspiration flying high, we’re expecting some stellar entries. And with a Camp Bestival 2017 family ticket up for grabs for the triumphant trolley pimper, expect competition to be fierce.


And finally for now, don’t forget to boldly go to our annual Fancy Dress Parade at 1pm on Saturday in the Kids’ Garden. Aliens, rockets, comets, stars and even space-pixies; the options are almost infinite! We’ve been planning our Outer Space outfits for ages, so make sure you and yours join us for intergalactic dressing up joy!


And don’t forget tickets are flying for our Outer Space adventures so make sure you grab yours while you can and keep on checking our website, Facebook and Twitter for all the latest sub space communications.


All tickets include camping from Thursday or Friday.


Use our 10-week payment plan to purchase your tickets meaning that an adult ticket can now be bought at a payment of around £19 per week over 9 consecutive weekly payments following your initial deposit payment. Book online via Ticketline only: select 'Camp Bestival 2016 - Weekend Payment Plan'. Once you have signed up to the payment plan, which basically means giving your agreement by ticking the bank mandate form on Ticketline’s website, they will automatically debit your card on a weekly basis. NB: Booking fees and a deposit (£27.50 per adult ticket) will be charged with your initial transaction.   More info here. 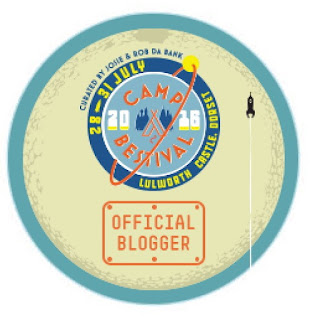 A Day In The Life Of A Childcare Practitioner

As parents we spend hours if not days, weeks, months even, trying to find the right nursery to be able to give our babies the best start in life.

Have you ever thought what it takes to be a childcare practitioner?
Have you ever considered it as a career option for when your babies finally go off to school? 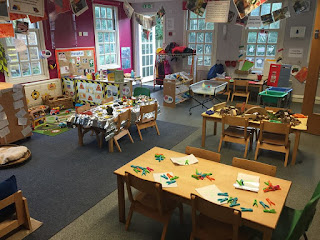 I was invited along to spend the day in a  Co-operative Childcare Nursery to see what being a childcare practitioner really involved.

Right from the moment I arrived I felt welcomed and at ease.
When starting a new job everyone suffers from nerves and you always over think what people are going to think about you and wonder if you are going to be prejudiced because of your appearance.

Here there was none of that, they accept you for you.
You already have a shared interest and that bonds you straight from the get go.

I was shown around the nursery and introduced to every member of staff, all of whom were friendly and welcoming. 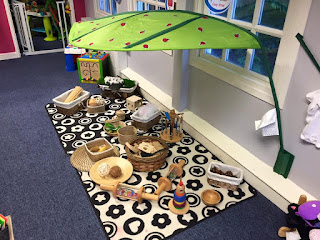 I started off the morning with the 1-2 year olds and straight away I had a little buddy by my side wanting me to go and play with him. The staff were more than happy to show me what I needed to do and how they go about their day.

The room was pretty much free flow and the staff were guided by what the children needed or wanted. There are set times for nappy changes, such as before they eat lunch and before the children go down for a nap, although if the child needed a nappy change sooner a member of staff would change them. 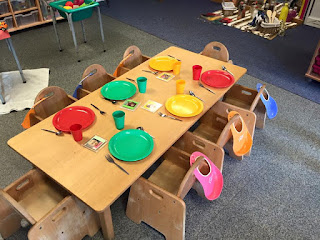 During lunch I headed off to the 3-5 year old room (pre schoolers) where its all about getting the child to become more independent and one of the ways they do that is by letting the children help themselves to their dinner and clear away their plates once they are done.

I also spent time in the baby room, other than making me want to have more babies of my own, this room was a joy to be in.
The babies were happy and the staff were bubbly.
It was very much baby led and the staff are happy to go with the babies flow.
Spending time with a child, much like you do with your own child, you're able to pick up on the needs of the child and know what the child is wanting or needing with out them actually saying the words.
You could see the bonds between the staff and babies instantly.

As parents we know routine is key with children and even in a free flow room there is a gentle routine, helping the children feel secure. If there is a set routine at home the staff will try and stick with that whilst the child is at nursery.
A key factor to working in a nursery is that you build a good relationship with the parents as well as the child. 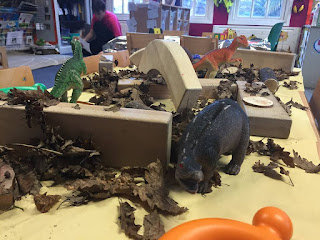 A lot of people may think working in a nursery is easy and anyone can do it,
"All you do is play with babies all day, what can be hard about that?"
In fact, it's probably one of the hardest jobs around. Not only are you responsible for someone else's baby you have to plan activities, write observations on the child and set key-goals to help them achieve their next milestone.

When I asked about career development all the staff said if they wanted extra training the Co-operative Childcare would be more than happy to help and find the right kind of course, if not they'd tailor a course to suit your needs.
The Co-operative Childcare as a whole seemed to get the thumbs up from everyone, they all said they were great employers and would always help when you needed it and understood if there was a problem.

I asked all the staff members what their favourite part of the job was and they all had the same answer;
The Children.

"Seeing them grow and being a part of their journey from babyhood right up until they start reception." 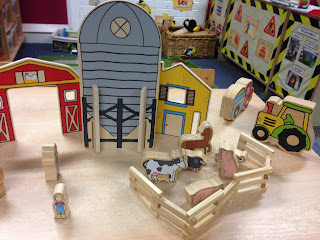 It was lovely to be in a work place where everyone was happy and not trying to be better than the next person.
They're all there for the children, and it felt like stepping into a warm family environment where everyone is happy to see you.
If you need help there is someone there who is going to be able to help, if not they'd be able to point you in the right direction.

All the staff say its a job they love getting up for in the morning and I can see why.
A childcare practitioner wasn't a job I'd ever really thought much about, but now I can see myself applying for a role in a nursery in the not too distant future.

I would have to say seeing how a nursery works and what the staff have to do, its very easy to compare it with being a parent,.
You already know how to do the every day tasks of bringing up a child, and knowing what they want and what not to do.
You may have dabbled in finding fun activities for your little one over on Pinterest, which would help you in being able to plan fun activities to do with the nursery children.
If you can sooth your own child, soothing another will be like second nature to you.

You already have most of the skills needed to be an AMAZING childcare practitioner, why not put them into action today??!! 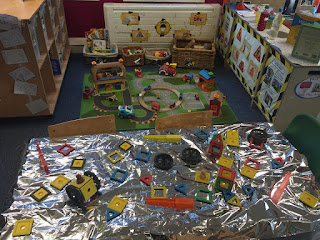 I took the boys out to the local nature reserve last week to get some fresh air into their lungs.

All my intentions were good.
We were going to see how many different birds we could spot, we were going to hunt down some mini beasts, and most of all I wanted to see if I could spot some seals.

About five minutes into the walk, Oscars legs stopped working.

Once one starts his war cry they all join in! 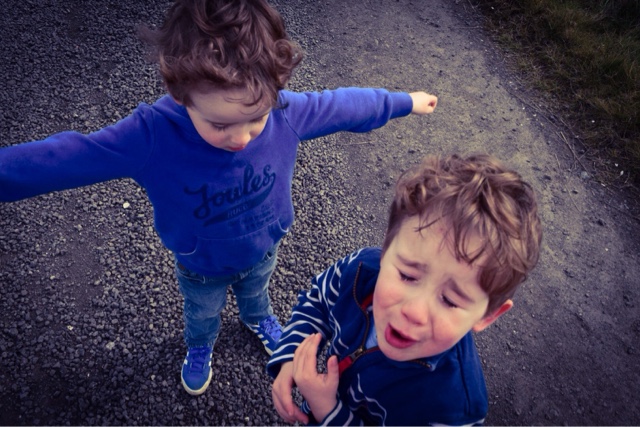