With the festival season nearly upon us, I thought id share something funky with you! 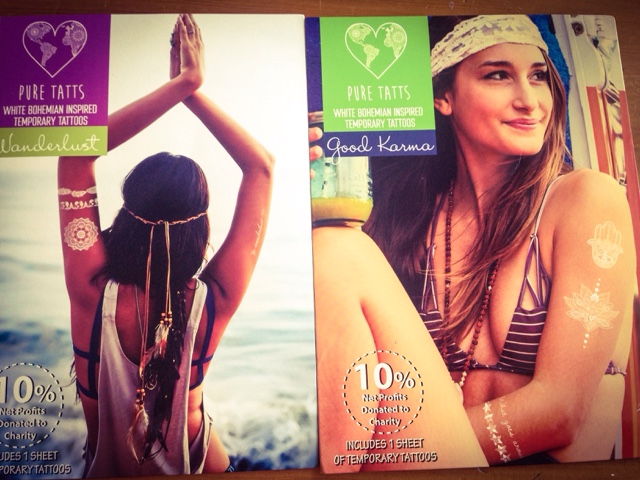 Pure Tatts are white temporary tattoos that instantly give you a bit of boho cool.

All the designs are super pretty and very detailed.

Noah actually thought I'd gone and got a new tattoo when he saw the one on my arm.

They don't scream transfers like most of the kiddy ones, these are very elegant.

They would be perfect for when going out on a night out, or when at a festival!
Even on holiday, the white would look amazing with a gorgeous tan.

A little bit about Pure Tatts;


"Pure Tatts has made it its mission to create intricate and unique tattoo fashion by teaming up with artists from around the world. Now you might be wondering why the heck did two former athletes start a temporary tattoo brand? That's an excellent question! Jason and Malte noticed a lack of originality in the tattoo fashion industry. Girls are stuck with the choice of either a standard gold or silver temporary tattoo - how boring! Through Pure Tatts they were able to create a lifestyle fashion brand that not only spreads positive vibes, but also makes an impact by giving back to the community.
Pure Tatts donates 10% of its proceeds to a carefully chosen charity each month."

Sgt. Pepper’s Friends is a non-profit animal rescue organization located in Aruba and founded by the amazing Rachel Brathen.
She is also know as @yoga_girl on Instagram and is one of the most influential yoga instructors in the history of social media.
Sgt. Pepper's dogs and cats are available for adoption in the United States, Canada, Aruba, the Netherlands, and Sweden as of now.
Every country they add to the list requires careful research, but they hope to open up to families in other countries in the future, as well. 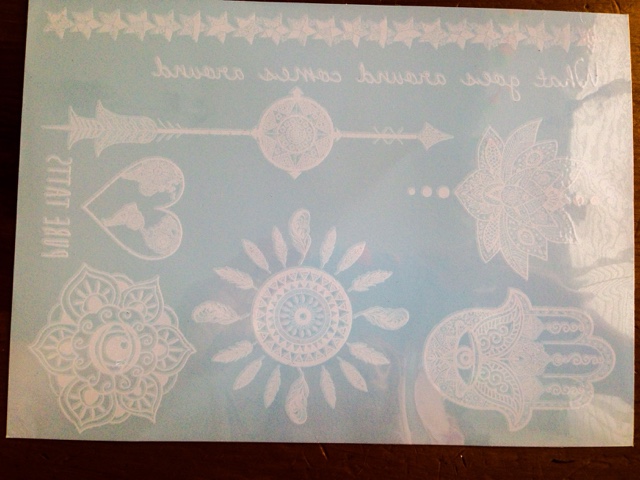 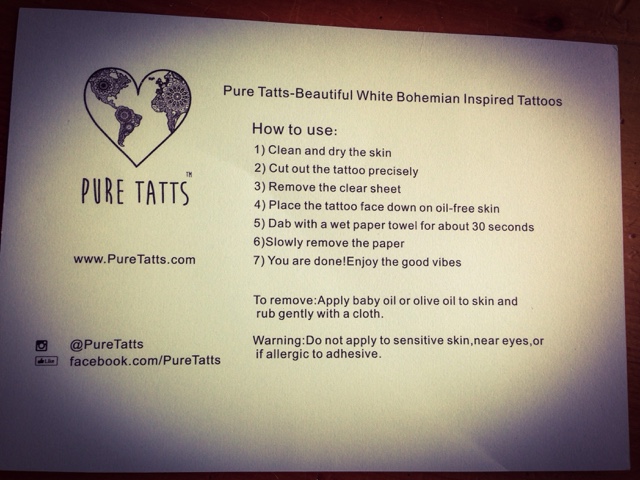 They were really easy to use.
I managed to get mine on with a trusty old baby wipe
(Is there nothing those wipes can't do!)

It last a good few days, with out it fading  then I scrubbed it off in the shower.
The instructions recommend using either baby oil or olive oil to remove the transfer. 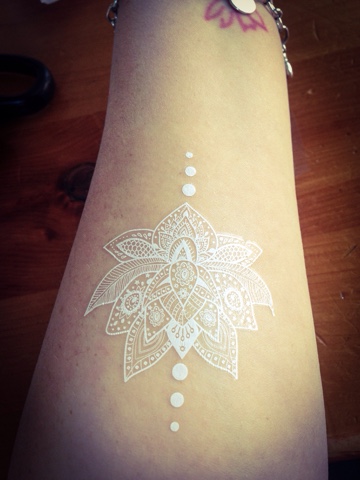 **I was sent the product for free, in return for an honest review. All thoughts are my own.**

So my baby turned two on Monday. 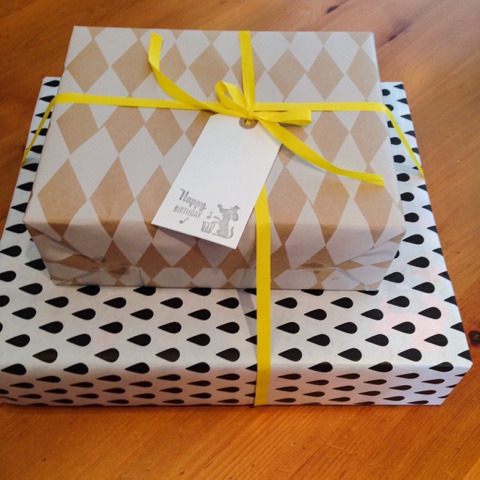 To be honest I was dreading it a little.
I don't want my youngest to grow up,
id much rather him be a baby forever.

Last Sunday my parents came over and let Ru open their presents and then took us out for lunch.

Sometimes Ru can be great when out at restaurants but other times....just plain awful.
He won't eat anything,
He is unable to sit still,
He's a runner.

Unless we go prepared; say like when we go to Costa, we always get a spare little costa cup and he's more than happy to pour his juice in and drink.
We go to Costa every week so its like routine for him, he knows what's coming.

Whatever we did he wasn't happy, in the end he sat under the table or run around my dad.

Their is a little play area outside, which I took Ru out too so he could run some energy off whilst we waiting for our food.

He found the biggest puddle and soaked himself head to toe.
I hadn't brought any spare clothes....duh,
so I raided the twins nursery bags which were in the back of the van and was able to change him into something dry.

Once back inside at our table, Ru behaved for all of five minutes, and ate one of Jon's chips and he downed a bottle of pear juice.
Pear juice and toddles do not mix well!

As soon as we got back to the car poor Ru threw up all over him and me and then twice more over the pavement, then went on to poop himself.

Minus the bad points it was a lovely day and everyone had fun. 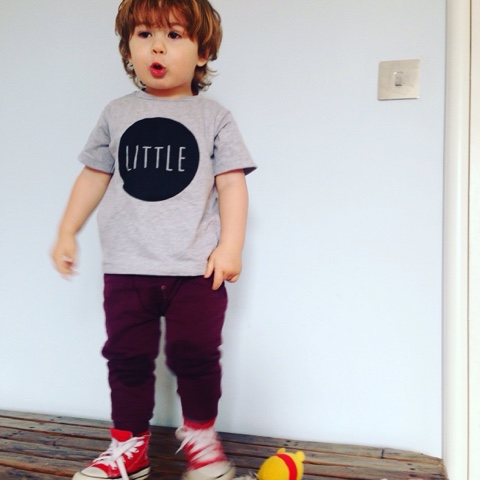 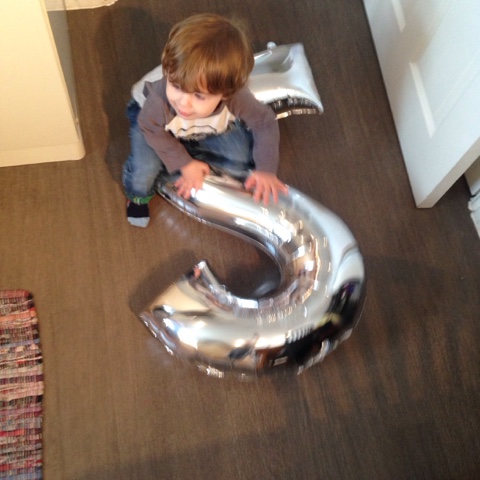 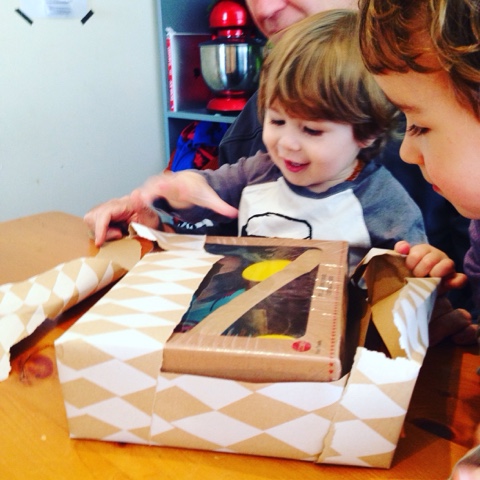 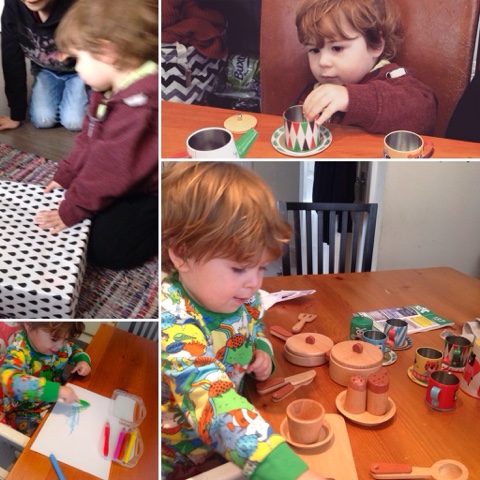 On Ru's actual birthday we didn't really do anything special, I spent most of the morning building his kitchen which we got from Asda.

He opened the rest of his presents once the twins and Noah were at school / nursery. They all got pretty jealous when he was opening things on the Sunday, so we thought it would be best not to do the rest with them around. 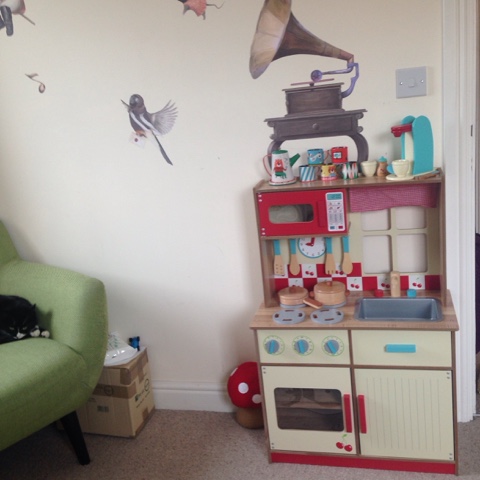 He got some really lovely things, a wooden cooking set and a nice outfit from Nana & Gramps (Jon's parents),
another outfit from his great auntie (Jon's auntie)
some gorgeous tops from tobias and the bear from his auntie Jenni (Jon's sister)
my gran and our neighbour gave him some money, which I spent on some more Disney Cars.
An awesome playdoh backpack filled with playdoh from his from his great gramps and Eileen (my grandparents)
A lovely Jellycat monkey, which came with his very own story from my aunt and uncle.
A gorgeous tea set and pull along horse from the pippa and ike show from my parents.

Some really lovely bits that he was very pleased with. 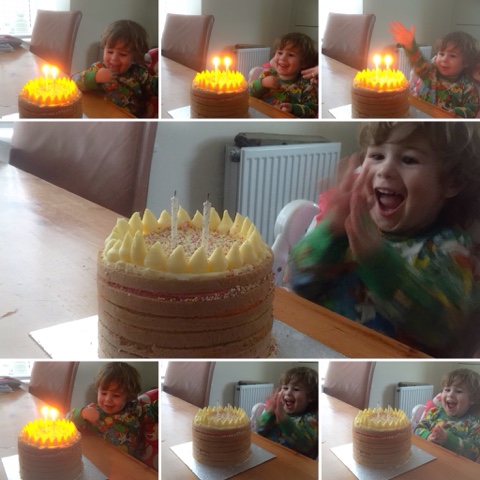 I bought Ru a rainbow cake ... well what I thought was going to be a rainbow cake but it was a cheat!!
Only the icing was different colours!
Ru as you can see had no issue with it, he was very impressed with it. Though he wasn't really a fan of it when it came to eating it. So I pretty much ate the whole thing.....spread out over a few days!

I'll be making my own rainbow cake when its time for the twins and Ru's joint party at the end of May. 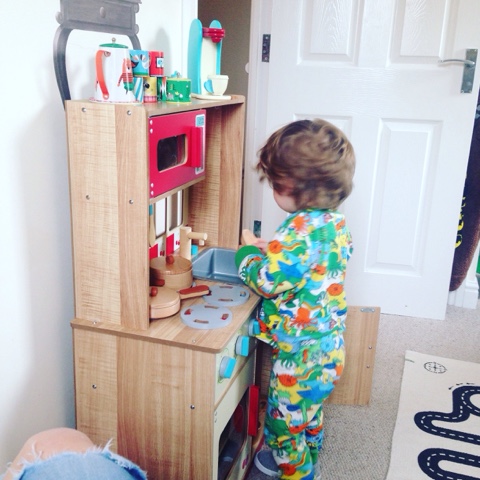 On Thursday Ru had his 2 year check with the health visitor, I majorly stressed out before hand, as I was worried she would be the same as everyone else about my concerns over Ru and tell me I'm imagining it, or wishing it upon him (yes someone has actually said that I'm wish ASD onto Ru, because obviously every mother wants her child to be autistic.)

But she was really great, we went through the questions and she took down my answers, she couldn't test Ru as he decided it was a great time for a nap.
She had only seen him a few months ago so already knows what he can be like.

After she went through the scores, she showed me where the concerns were and that he was in the "black" on a few of them.
She then came up with a plan of action, so that if we do need to refer him to be assessed for ASD we will have all the back up we need.

We are going to have a couple more health checks, to see if he's improved and she has suggested I go along to some parenting classes and scope out how other kids are and see if I can compare them with Ru or see if Ru is actually completely different to everyone, not just the twins and Noah.

I feel a lot more positive about everything and it feels like the stress has been lifted off my shoulders.
Its nice to have someone who actually understands my issues and not just bat them away because they don't want to believe something may be up with Ru. 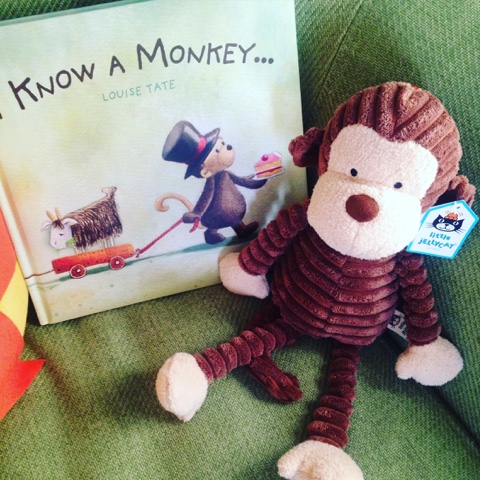 For Easter my mum bought the boys a Insect lore Butterfly Garden,
She knew they'd be getting lots of chocolate so she wanted to give them something they weren't  expecting.

The boys all loved watching the caterpillars.
Ru was amazed by them.

We attempted to set them free twice, the first time it started hailing as soon as we set 3 free.
We managed to save one but the other two had flown off.

The second time, it was perfect.
Some flew off straight away, others sat in the garden before spreading their wings.

This little one didn't want to leave Ru's hand.

The other boys weren't to keen on holding them, they got a little freaked out when I tried to place one on them.

We can't wait to do it again next year! 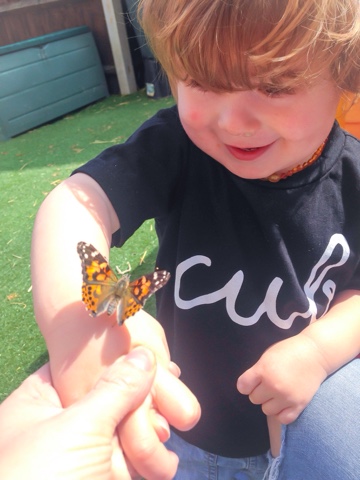