What's Been Going On With The Mini Beasts.....

June 13, 2017
I've been away longer than I thought and said I would which lead me to questioned myself if blogging was what I really wanted to be doing.
It all seemed to be turning into a bit of a chore.

I'm still undecided but I wanted to come back and do the reviews that I have outstanding, as they are really cool and try and do more personal posts to see if I can get back into the swing of it.

In this post I'm going share how I'm getting on after the miscarriage and what the boys have been up too.
It's a bit of a heavy photo post but I know some of you guys like that! 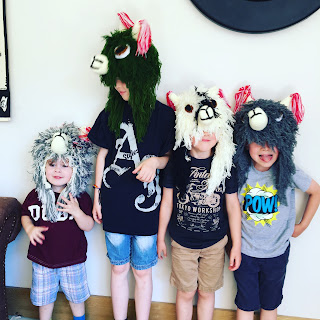 My parents came to visit after they got back from South America and they bought the boys these awesome lama hats.
The twins are now desperate for it to become cold so they can wear them to school.

Whilst my parents were here we had a big storm with thunder and lightning and the boys all went crazy for it and started dancing around in the rain and waiting for the lightning bolts to flash up in the sky. 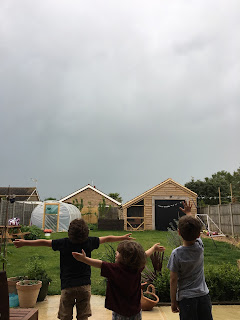 Noah went off on his first holiday without me, and spent the half term in sunny Portugal with his Auntie Jenni and Uncle Ben.
He had a great time away and hardly missed us at all. 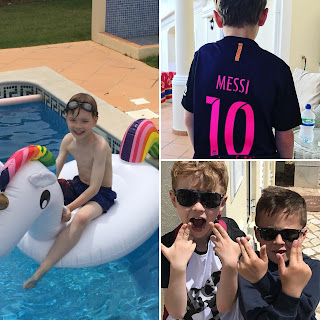 We have started taking Ru to parent and toddler swimming and he seems to be really enjoying it.
I thought it would just be parents and toddlers just enjoying the pool without other people in it, but its  like a little swimming lesson and helps babies and toddlers get used to being in the water.
Ru has always been a bit iffy when it comes to the pool but he really enjoyed his first class.
We will be going back next Monday for another one. 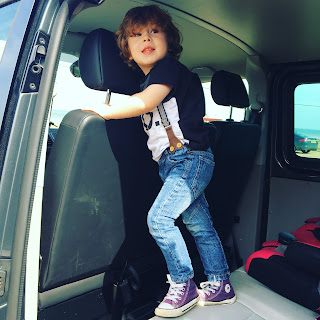 Whilst Noah was away in Portugal we tried to make sure we did some fun things with the twins and Ru.
On the days that Ru was in nursery we took the twins to the arcades on the beach front and gave them  £5 each. Oscar and I both hit the jackpot on one of the ticket machines and each won 100 tickets and Alex took a liking to the 2p machines.

In the end we managed to win over 600 tickets and the boys each picked 3 things from the prize shop.
Afterwards we got some chips and ate them on the beach front. 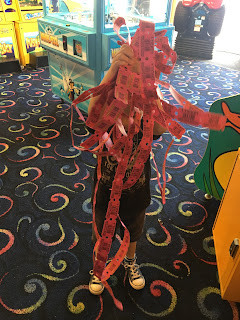 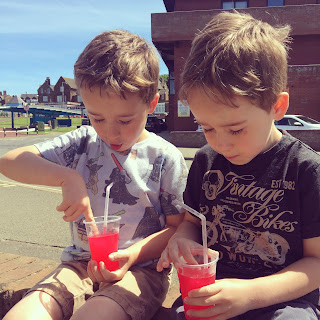 We popped down the road to the Animal Gardens and the boys enjoyed running around the maze finding all the stamps they needed to collect in order to win a badge.
We had great fun until Ru decided it would be a good idea to kick sand into my eye. 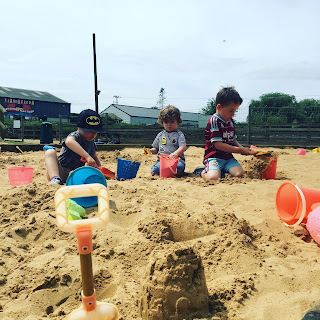 With all the lovely weather we've been having we decided it would be a great idea to buy the boys a paddling pool.
We found this one on amazon and the boys were very impressed with it. 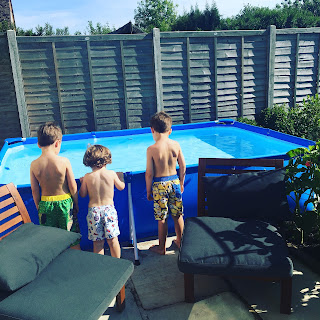 It's ridiculously cold in there and the boys can only really manage to stay in for 10 minutes before there lips turn blue.
I don't mind it too much, but I can sit down in it and the water comes up to my chin, where as the boys are too small to be able to sit down in it with their heads above water.
Hopefully when its summer, the sun will be able to heat the pool up just a tad so its more enjoyable for them.
If not it will be a summer of going over to Nana & Gramps house to use their heated pool. 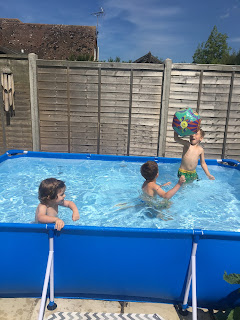 The twins have just had their 5th birthday.
We gave them their presents early, so they could learn to ride the bikes before they had a sponsored trundle at school (the day after their birthday.) 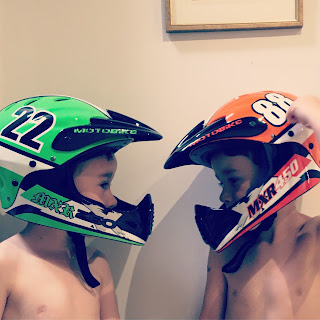 They loved their full faced helmets that Nana & Gramps bought them and they took to their bikes like pros.
Alex took right off zooming around the garden and Oscar tried to peddle backwards for the first 10 minutes but then it clicked. 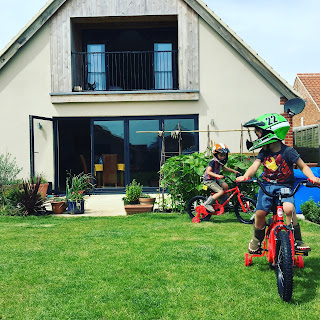 After a few days of riding round the garden we took them out to ride around the house, Ru went on his balance bike and both Jon and I had trouble keeping up with them. 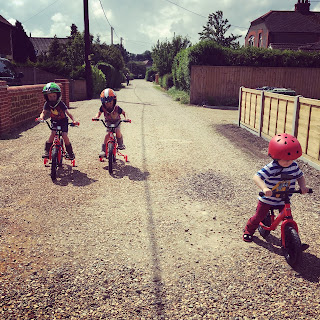 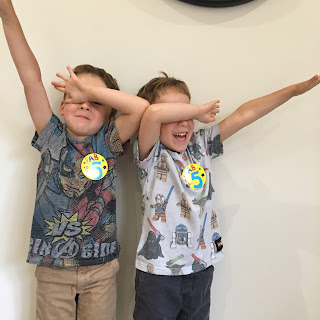 Another big thing happened recently ...... Rupert had his first ever proper haircut and this was the end result. 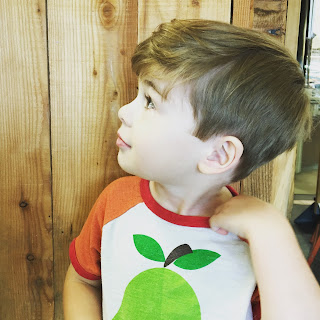 He was so good and did everything the barber told him to do, it took nearly half an hour to chop all his hair off but he didn't once moan or want to get down.
I didn't plan for his curls to be all cut off but he could hardly see and was itching his head a lot so I decided I would just go for it and I am in love with it.
He looks even cuter than he did before.
We kept it long on the top, as we didn't want to take his wildness away too much, we still wanted him to look like Ru and I'm very pleased the barber actually listened instead of doing his own thing.
Ru likes his new hair too, and tells everyone all about it. 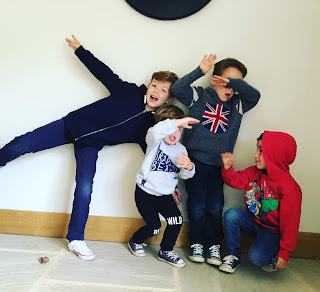 I'm started to feel like I have myself back together, I kinda lost it a little after the miscarriage and just felt like I couldn't be bothered with anything or anyone.

My body had failed me, and that just made me fall to pieces.
I am a mum, making babies is what I do. If I couldn't do that what really was the point.

I let the boys homework slide, I was angry and I was a total a mess.
Jon and I argued.
Mainly I shouted at him then at the boys for just being them.

Having the break from social media and the blog I was able to spend time being the mum I should be to the boys and have enjoyed just being with them and taking in the love that they give me everyday and not asking them to pose for all different sort of pictures.
It was nice to be natural and not to have to put on some sort of a show.

I have got our routine back in order and their homework is back on track.
Noah is proving to me that he is further ahead than his school think and the twins are doing amazingly well with their reading and writing.

Ru is going to be attending the schools nursery full time from September, so I have started to look for work.
I'm ready for a new challenge and I'm ready to get back into the work environment.
I have been doing the mum role for nearly 10 years now and I feel I need to step into a new challenge and push myself to be the very best at another thing.
It's time for me now and I always said once the boys were all in full time school and happy that, that would be the time for me to start working.

I have sent my CV out to a few companies so fingers crossed I hear something back sooner or later.

I am happy to be back putting some love into the blog and I'm enjoying sharing pictures on Instagram again.