Disney Junior's The Lion Guard, Kion, the brave leader of the Guard, and his team are put to the test when they face the evil villain Scar!
Join Kion as he challenges Scar in the action-packed Rise of Scar Playset. 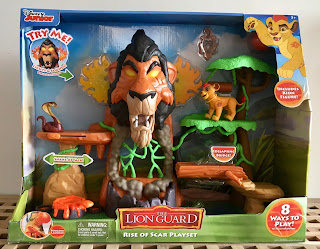 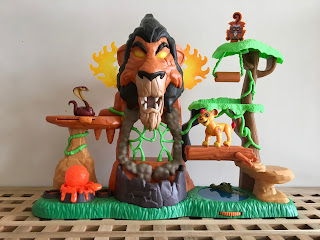 The boys all really enjoy watching The Lion Guard on Disney Junior so when this Rise Of Scar Playset from flairplc arrived they all went rather crazy.

The Lion Guard Follows on from the incredible story of Simba in the Lion King, this new hit series recounts the efforts of Kion, the son and youngest child of Simba and Nala.
Follow him as he tries to assemble a team of animals to protect the Pride lands.

I originally agreed to review it for Ru but the twins and even Noah enjoy playing with it and I often find them playing with this rather than on the tablet or DS.

Ru can easily be kept entertained playing with this with his Cars and Kion for anything from 10 minutes to half an hour. Which for him is a long time.

With Kion's movable legs its easy to switch him from a sitting pose to jumping pose in a flash and move his head around like he's really taking in the all the dangers around him.
Ru often stretched out his front and back legs like he was jumping around just like our new kitten Link. 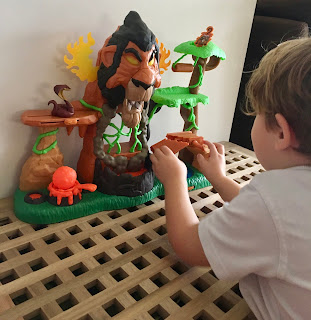 Getting Kion to cross the bridge and then making it collapse always made them roar with laughter.
Ru's favourite feature was the Lava Ball.
He really enjoyed trying to get it fly all over the kitchen. 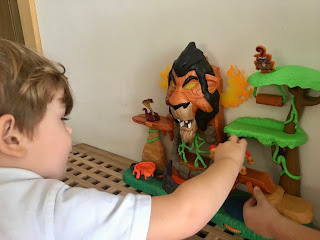 Scars head pops up slowly when you press his nose and as his rises his eyes light up and the flames pop out. After his is risen you can press his nose to make different noises, such as lion roars or monkeys chattering. 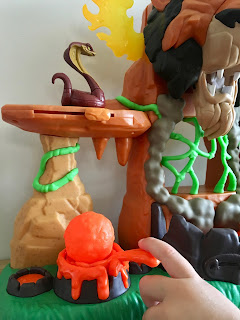 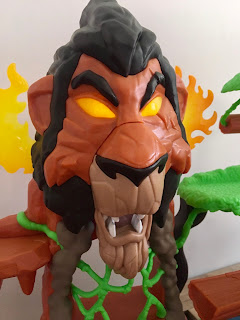 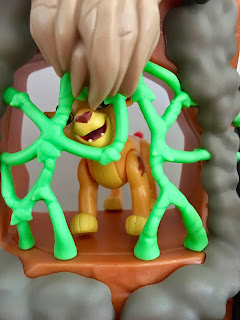 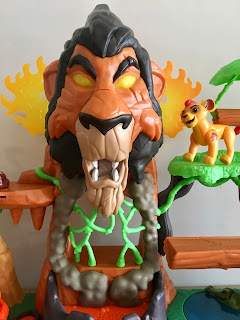 Ru really loved making Kion get up to all sorts of adventures... getting stuck in the vine jail and falling into the crocodile pit.
To think of it I don't think poor Kion had a good ending in any of Ru's adventures. 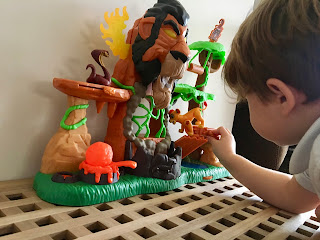 The boys did play nicely together but I think this toy would be even better if it came with an extra play figure.
We also had a slight problem with our batteries, but once I had switched them around the playlet worked fine. 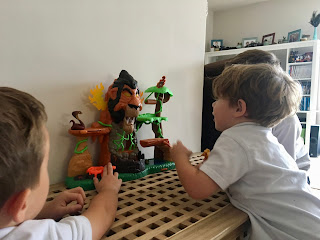 This playset is perfect to act out scenes from the cartoon or let your imagination run wild and play like Ru does.

This would make a brilliant Christmas present (I know I mentioned the C word and it's only September...sorry) or even a birthday present for any Lion Guard fan.

Another big thumbs up from the 3 little Mini Beasts! 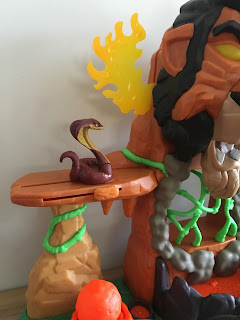 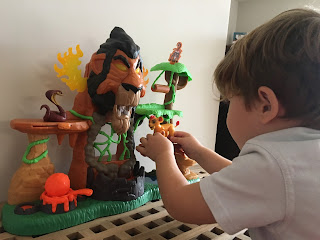 Available from Smyths Toys for £49.99