Looking Back & Looking Ahead

December 31, 2017
2017 was a funny year.
It started well, we had just moved into our dream home and started up a new life in a beautiful Norfolk village.
The boys all settled well into their new schools and everything was just perfect.

Roll on a couple months down the line and Jon was down in London for a month learning about his new pain device that was going to be inserted into his back, yet another operation on his back!
Whilst there he witness the Westminster attacks and hasn't really been the same since.
One of his biggest fears unfolded right before his eyes and he couldn't do anything about it.

A few months later we suffered two miscarriages, one after the other.
The final one having to be removed surgically.

After getting our heads around that Jon had a back spasm which ended up with him on the ground not being able to move, paramedics and the air ambulance all had to see to him and he ended up back in hospital for two weeks!

Even after all the heartaches and pain we managed to end the year on a happy note by finally getting married.
It really was a great day and we were over the moon to be able to spend it with all the people that we love dearly. 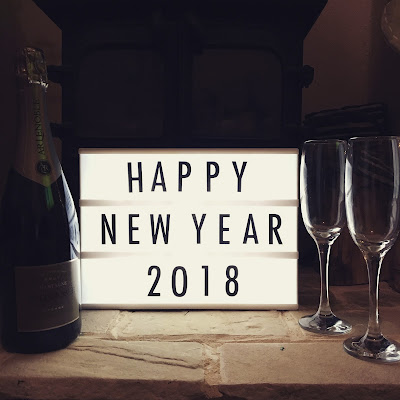 2018 is a brand new sparkling year and we already have lots to look forward too.

After 10 years of being a stay at home mum I am finally starting a new chapter and going back to work!
January 5th I start in the reception class training to become a TA (teaching assistant)
It will be voluntary to begin with, with the aim to do a college course and finally get on the pay role.

We are heading off to Centre Parks towards the end of Jan and then some time during in the year Jon and I will take a weekend break up in Edinburgh for our proper honeymoon, we just have to wait for Jon to be feeling 100% better.

Jon has started a new venture and that seems to be paying off, so we're hoping 2018 is the year of doing and not just being.

I don't really do New Years resolutions but I am going to try to read more books and be more crafty this year.

What are your goals for the new year?