Noah has been a fan of WWE since he was in reception class.
There was no way he going to get away without being a fan. Jon has a love for wrestling that runs deep within his bones, even I grew up watching it and even though I say I don't enjoy it, I know most of the wrestlers and do actually get really into it when we watch RAW.

Noah was introduced to the world of WWE early on and loved it as soon as he saw it.
Jon is always keen to take him to the Live shows whenever possible and is more than happy to sit beside him on the playstation for hours on end and play WWE 2K17. 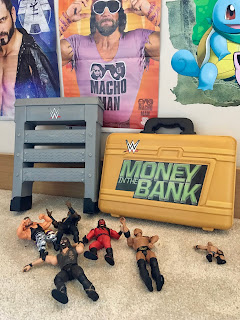 Now that we live just around the corner from his cousin Sam, another WWE super fan I hear nothing but WWE this and WWE that.
They are both mad about the sport and if they aren't telling each other all the different facts about one wrestler or another they are acting out their favourite finishers on poor innocent teddy bears.

So when I was sent some WWE Power Props I knew I was going to gain some mum points. 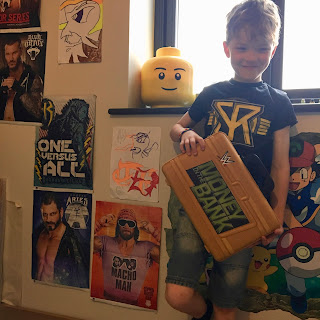 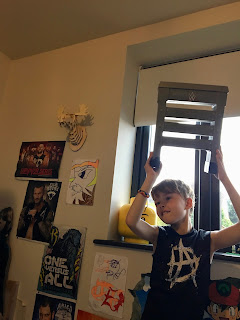 Dean Ambrose is one of Noah's favourite wrestlers, so the ladder and t-shirt have now become his favourite toy.

Sam and Noah both have had great fun playing with the foam toys.
They are nice and hardy and won't be easily broken, no matter how hard they hit them onto the floor. Nor do they look like that will start to fall apart anytime soon.

They are nicely made to look like the real thing and are really good at helping wrestling fans feel like real life Superstars!