February 13, 2017
Sorry I haven't been on the blog in a while, if you don't follow me on Instagram you won't have noticed that Oscar and myself had spent the last 5 days in hospital. 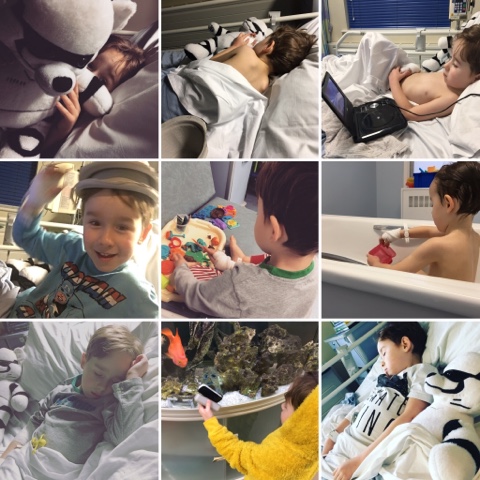 On Friday 3rd Oscar had his second big bump to the head (he had his first just before the Christmas holidays.)
He seemed ok when I picked him up and on Saturday morning, by the afternoon however he was wobbly and complaining of feeling dizzy.
We put him to bed thinking he'd be ok by the morning.
Sunday arrived and he was being sick and looking really pale, we took him up to a&e only to be told he had a tummy bug.

We kept him off school Monday and Tuesday and both those days he spent laying on the sofa looking into the distance talking about random things that he was seeing.
No sickness to suggest a tummy bug.

By Tuesday he was not only distant and in his own little world, he was getting confused to what was going on around him.
Totally not a tummy bug

I booked him an emergency appointment at the GPs and from there I was told to go straight to the paediatric assessment unit.

He was admitted Tuesday evening and hooked up to an iv drip of fluids and strong antibiotics then sent off for a midnight CT scan!
They had no idea what was going on with him but had a list of possibilities.

Over the next few days he had a series of tests which included,
eye tests, ear test, MRI, Lumber Puncture and endless blood tests.

Oscar had some amazing nurses looking after him, Oscar had them all wrapped around his little finger and would do whatever he asked.
His favourites were Michelle and Chris both of who really did go above and beyond to keep him happy!
So a huge thank you to the both of them.

Thankfully by Saturday they had ruled out everything nasty and ended up deciding it must have just been concussion after all!

We bought him home and everyone was over the moon to have him back.
Sunday morning came and he looked as though he was back to where he was at the start of the week.
We decided to call back the ward and they said to bring him back.
Jon spent the night with him and the doctors told him this morning, its probably the result of his Lumber puncture, as that will leave him groggy and feeling unwell.

So they are both home and we are trying to get Oscar to take it easy.
He's currently on the sofa watching Lego Scooby-Doo.

It's great to be back at home with all the boys under one roof, last week was like we were all on pause.
Now we have the half term to get back to normal and enjoy being together again, before its back to school.
Hopefully by Monday Oscar will be feeling well enough to go back to school.