July 18, 2017
Last week we ordered a new bed for Ru.
We have been wanting one for a while, but kept holding off as we thought a single bed would take up most of his room.

Ru was no longer sleeping in his cot-bed and continued to co-sleep with me which I don't mind at all buuuuut Jon and his back don't really get on with it.
Even though we have a super king sized bed, Ru will take up all of my side leaving me in the middle and Jon feeling like he's about to be kicked or poked in the back.
So we spent a while looking for different sorts of beds and going back and forth from his room with the tape measure and finally agreed on the MALM bed from Ikea.
The bed wasn't too pricey for a bed but we made sure we spent a bit on the mattress - as we're hoping it will last him a while!

The Ikea delivery turned up Thursday evening, so Friday I completely emptied out his room and took down the cot-bed, his little face had no idea what was going on and he kept asking for his bed back!
Eventually he got excited when we got his new big boy bed out of the box.

It didn't take too long to put together and then I was able to put everything back in its new place.

I thought it would be nice to show you his new bed and bedroom lay out along with where some of my favourite bits are from. 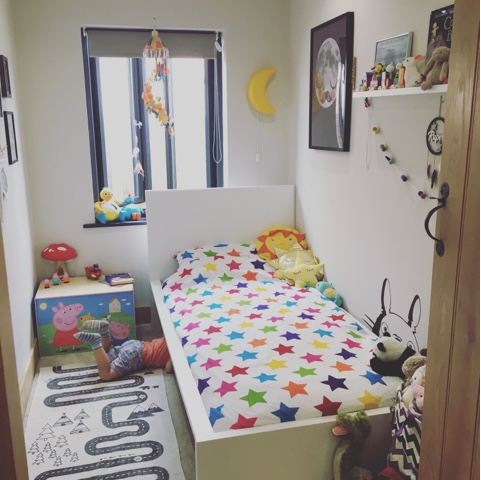 The bed is a great size, it fits both of us on it, so now when it comes to the time when he wants to get into bed with me, ill just get in with him.

It also doesn't take up too much room and he still has plenty of room to play in and it also doesn't look like we've just stuffed any old bed in there.
It looks well planned. 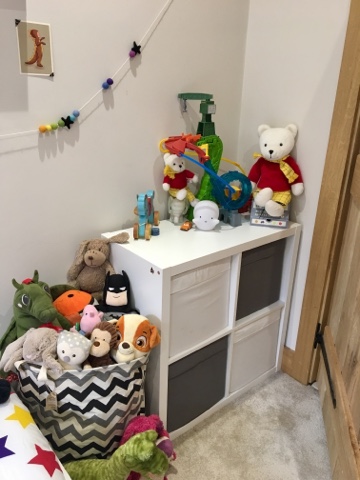 At the end of his bed and behind the door is his Ikea unit full of all his clothes and a basket full of all his soft toys.
Ghost light - alittlelovelycompany
The Rupert Bear teddies were presents bought for me when he was born! 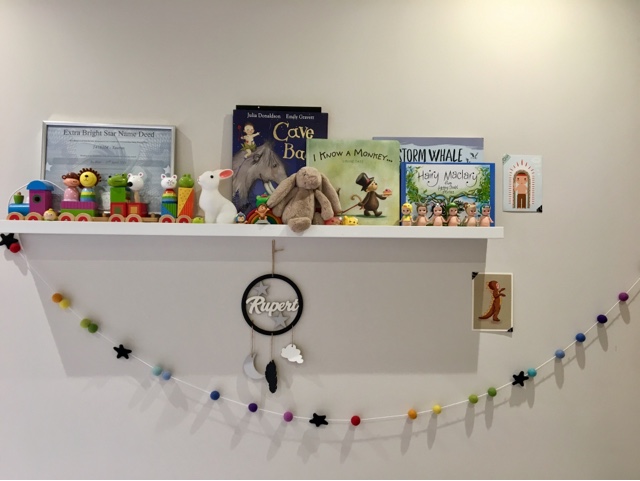 Above his bed now is a shelf full of all my favourite things and favourite books that I bought him
Dream catcher - canny_little_clouds
Garland - sausage.and.the.dog
Sonny Angels - the-pippa-and-ike-show. 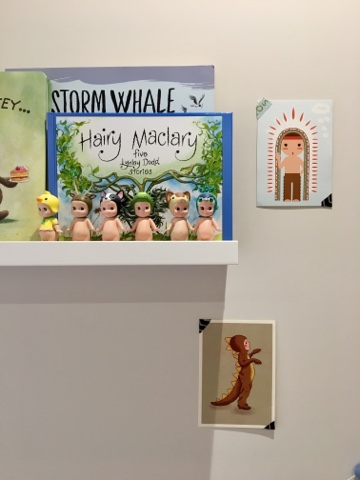 On the other wall are more books and the start of a picture wall.... 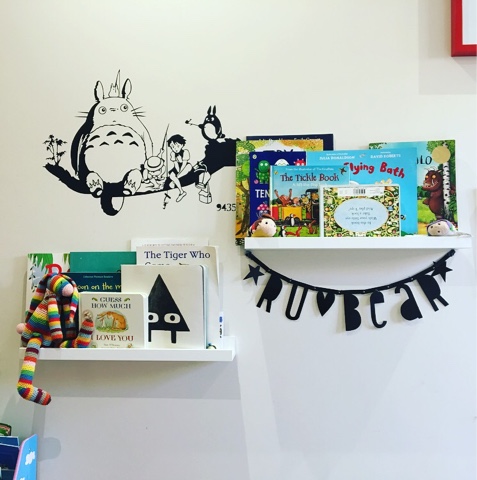 Dream Big & Adventure Awaits - blueberrybookids
Dino Ru - Nichola Cowdery
Hanging R - Next
Super Hero Rupert - Frame my name
The two Where The Wild Things Are prints are from a free printable site but I've completely forgotten which one.
If I remember I will update this with a link. 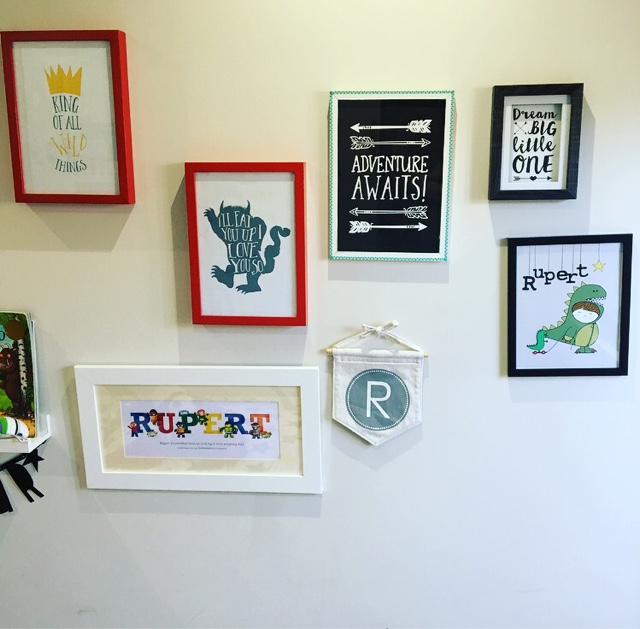 Ru's new bed covers have of his big Totoro but I still think he looks cute peeking out like this.
I got him off amazon.
Bedsheets - Argos 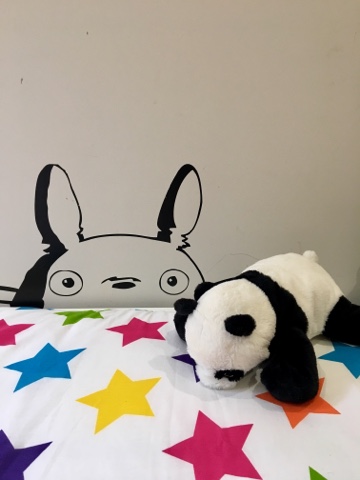 By his bed he now has his Peppa Pig toy box which is also from Amazon, which we were sent for a campaign we were working on.
It's full of rubbish but works well as a bedside table too.
Toadstool night light - theirishfairydoorcompany 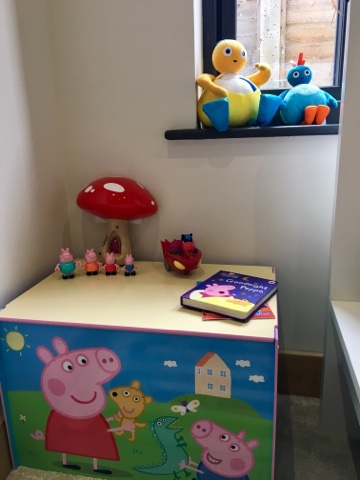 Just above his head is my favourite poster ever ...

Moon für Neil print - Martin Krusche which I got from the-pippa-and-ike-show.

His moon night light is from Ikea and I also have his beloved amber necklaces hanging up as he's not allowed to wear them at nursery :( 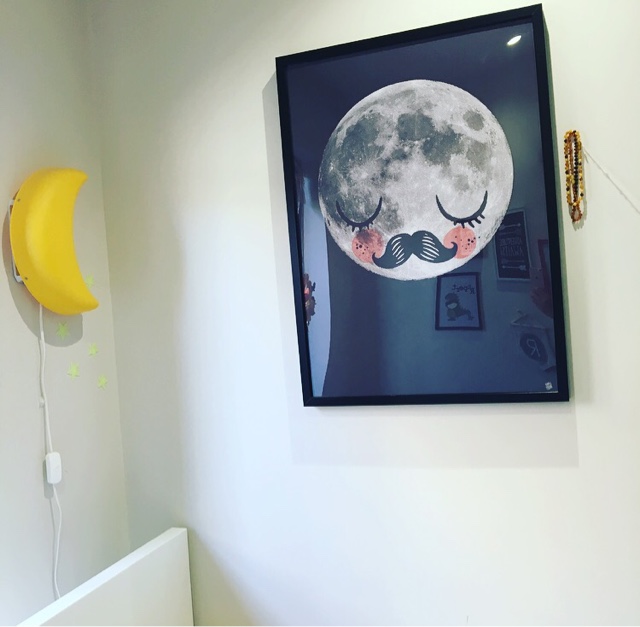 Just be the door he has his Peppa pig book shelf which we were gifted for a campaign but you can find it over on amazon.
It holds the rest of his books which didn't quite make the shelves, but every now and then we have a change around.
His rainbow bunny was a gift from my mum who bought it for him when he was born.
The little ride along car was found at a carboot fair a couple of weeks ago for only £6, so a proper bargain! 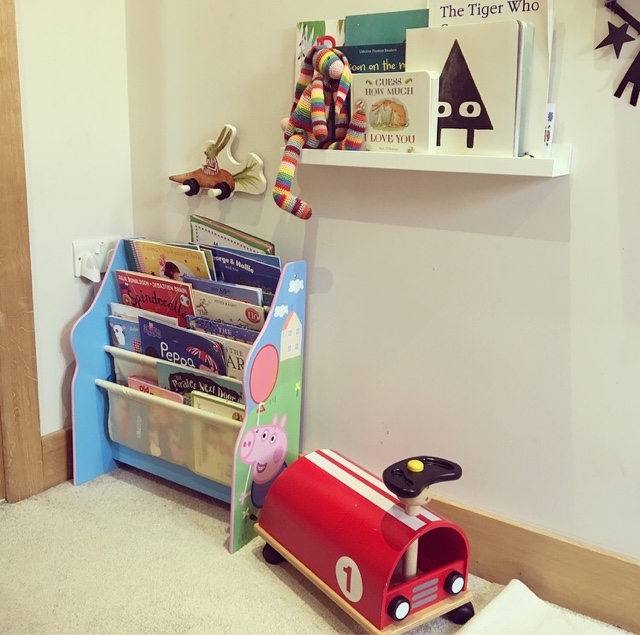