June 14, 2015
My little indie pop went into labour yesterday and being the odd bod she is, she wanted to be right next to me even if that meant in with the chaotic mad ones who for some reason we're extra mad.
In the end to stop her getting her and far too stressed out I placed her in my ensuit, with her blankets and her box that I made up a few weeks before!
I managed to be there for all three births!
My little trooper did so well, she was a bit confused as to what to do with them after she'd cleaned them up and eaten the placentas. The last one born had been left and was rather cold so I made sure he/she was placed next to indie first then the others.
After a little while it clicked and she relaxed.
This morning when I return, they were all cuddled up and calm, indie had eaten her dinner and was looking back to normal. 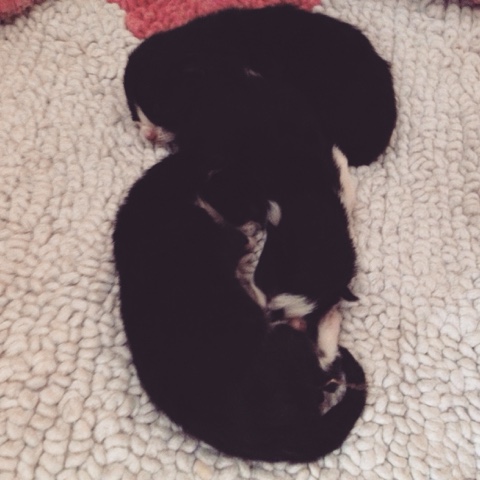 My neighbours brought round fresh salmon trimmings for her breakfast, which she munched up straight away!
Indie and babies are super :)