Book Trust have teamed up with Peppa Pig and Jo Frost to bring you their new campaign.
Bath, Book, Bed.

We were lucky enough to be asked if we wanted to be part of the campaign and seeing as I've just got Ru back into a routine of bath, book and bed I happily said yes. 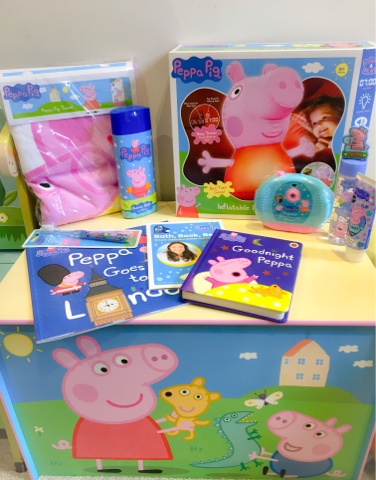 We were sent some amazing Peppa Pig goodies, a whole range of bath time fun and some new bedtime stories.
Ru is slightly obsessed with Peppa and George at the moment so when he opened the box he squealed with delight!

Bath, Book, Bed is all about developing a regular nightly bedtime routine, which we know is associated with improved sleep in young children - and, of course, there's nothing better than snuggling up to share a soothing bedtime story. 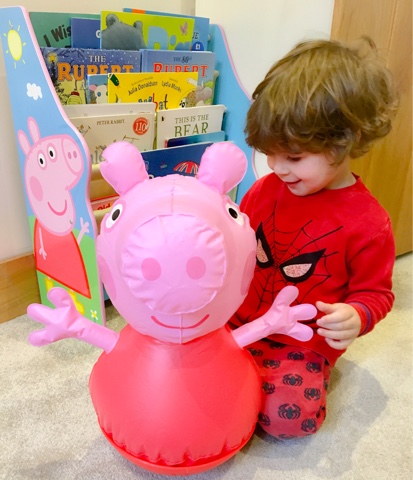 With all the boys I have always stuck to the same routine of bath, book, bed and it has always worked.

Then along came Ru and he shook things up a bit.
He was great at sleeping as a baby and would settle by himself after a cuddle, but then came the day that he decided to jump out of his cot at around 18 months old.
Then from then until very recently he wouldn't sleep and would stay up till midnight being crazy.

It had become his routine, he would watch me read to the others and put them to bed and then he would come downstairs and have a few hours playing without the others around or being glued to the iPad.

We were so tired and we thought we had tried everything so we caved and thought that was it, he was never going to sleep like the others.

But then enough was enough, our relationship was suffering and we were beyond tired and Ru's meltdowns had reached boiling point.
We needed to do something and quickly. 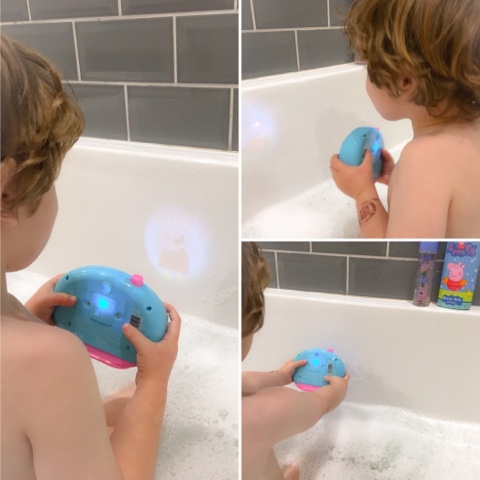 I reverted back to my tried and tested routine which was bath, book and bed.
This time round I made sure at 6'oclock the TV was switched off and the iPad was hidden out of sight.

A nice warm bath with some essential oils in was run and Ru was put in on his own, as when he baths with the twins, things get silly and the bathroom floor always ends up with more water on it than in the bath. 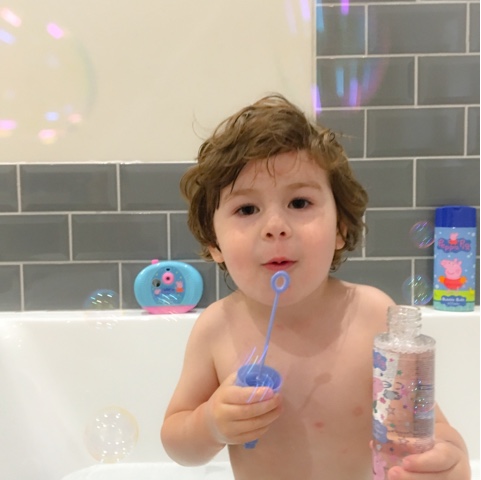 Having the Peppa Pig bath bubbles really helped him enjoy the bath more, he loved blowing the bubbles and watching them pop. 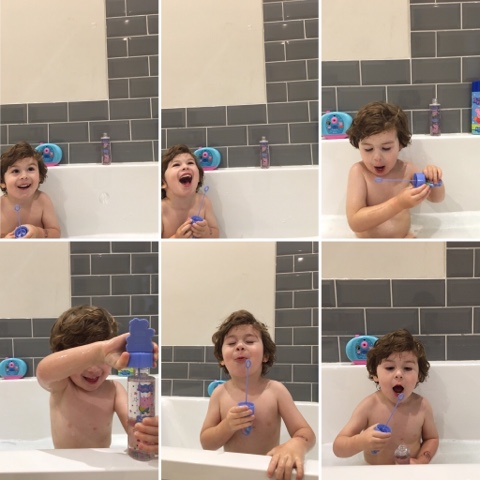 We give him at least 15 minutes in the bath as this seems to really help him wind down.
Then its out and teeth brushing time.
He absolutely hated his teeth being brushed before, and I have been through so many toothbrushes with him to see if different ones would make it more fun for him.... 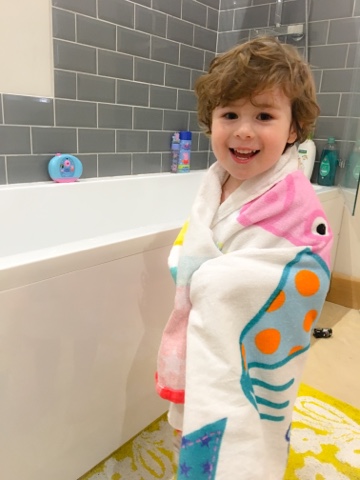 He brushed them first and then let me do the rest. 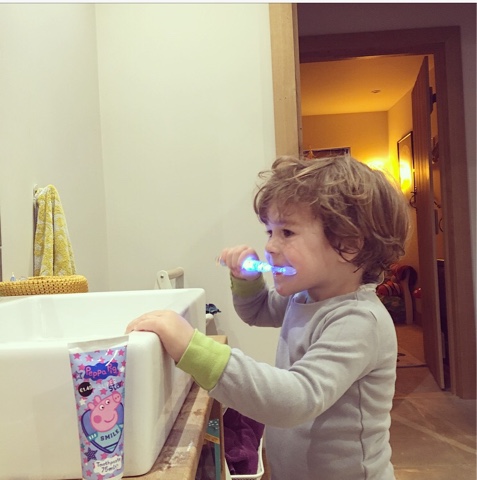 After the twins are in bed and Noah is reading to Jon, I take Ru in to his room switch on his night light and let him pick a story.
He tends to want the same story night after night, but thats ok as I know he's going to listen.
He'll lay in bed drinking his warm milk and listen to me read.

He still has a bottle which I know is bad but its a comfort for him and eventually I'll phase it out. 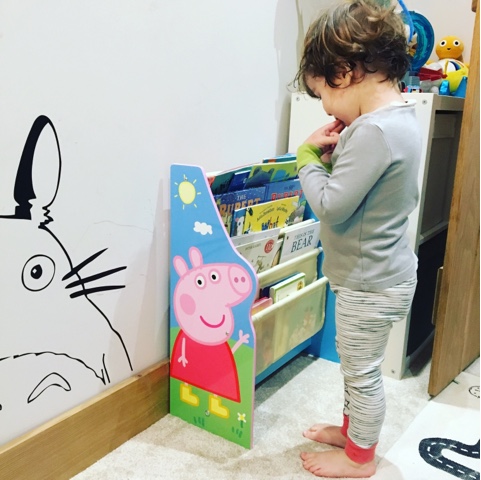 Once I have read the book twice I'll then hand it to him as he likes to have a look and pretend to read it back to me.

After we have finished with the book we will then switch off his night light and then sing some nursery rhymes (incy wincy spider is his favourite) and then finally he will drift off to sleep with me patting his back.

Now most nights he is fast asleep by 8pm.

My next challenge is to keep him in bed all night.
He still wakes around 11 to get into our bed but compared to his last routine this is much much better and it works.
He gets more sleep and we actually have a child free evening. 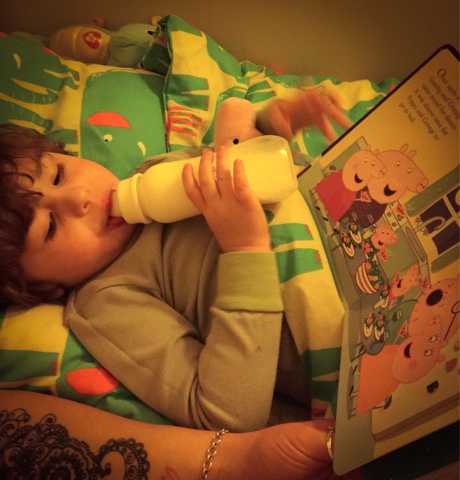 So my top tips for getting little ones into bed....

Turn the TV off and take the tablet away an hour before bed,
Always have a warm bath to start off the bedtime routine,
Read a story, reading a bedtime story as reading together is a great way to bond and relax the mind.
Keep lights nice and low, night lights are great at this.

Another tip that I find useful at bedtime .... a tidy bedroom helps keep the atmosphere nice and calm.
I will always make the boys tidy up before bed.
Otherwise they're normally tempted to get out of bed and play with the toys that they can see.

Join us for our Bath, Book, Bed events at intu Trafford Centre, Manchester on April 27 and intu Lakeside, Thurrock on 28 April.

You’ll have the chance to meet Jo Frost and a very special surprise guest, and get lots of advice on winning those bedtime battles from Jo and the BookTrust team. The events are free and there’s no need to register in advance – we’d love to see you there.

Find out more about our events right here