I thought I had it all figured out when it came to Chicken Pox.
Ru didn't seem to have any issues.
He had spots but he went about his normal toddler business without much of a fuss.
He'd enjoy his oat baths and then would allow me to cover him in Virasoothe.

So when the twins and Noah started coming out in spots, I thought I knew what I was doing and everything would be hunky dory. 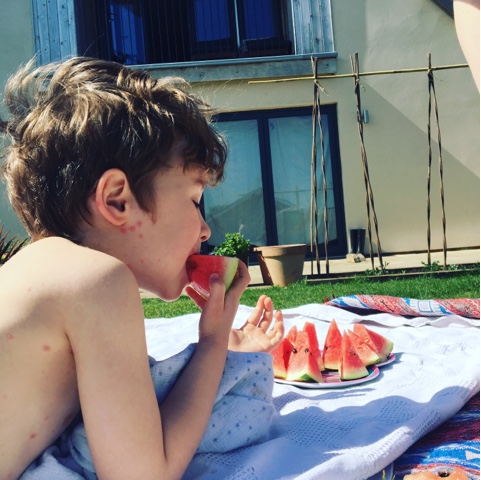 OoooH how wrong was I!

It's a complete nightmare, they won't stop crying, they hate being touched, the spots are everywhere and OMG they are massive!
Poor Alex even has one right on his bottom eyelid.
They all have them around and on their lips.

They are in sooo much pain and I am completely powerless.
Virasoothe is doing nothing, the oat baths aren't helping and the Calpol and antihistamine doesn't seem to be doing anything.

I was bed hopping from one twin to the other last night, whilst hearing Noah cry out in pain downstairs. It's was probably one of the worst nights we've had in a long time.

This morning I sent Jon out to buy more supplies.
Lots of people on Instagram have told me they used PoxClin, so that was top of the list.
Along with more Calpol and antihistamine.
He came back with everything I asked for plus a giant Costa Coffee to make my life a little more pleasant.

Alex has spent the whole day naked, as he can't bare for anything to touch him, Oscar has been very quite...he hasn't got it as bad yet, but he only started coming out in spots yesterday.
I recon tomorrow is going to be his bad day.
Noah stopped crying around lunch time and says its not so bad now I've started using the new cream/mousse, but he still isn't keen on me putting the PoxClin on him.

They all had a bath with normal bubbles and then were creamed up and given their nightly dose of Calpol and antihistamines before being put to bed.

They pretty much fell asleep instantly, as they are just so drained.
Fingers crossed they sleep better than they did yesterday. 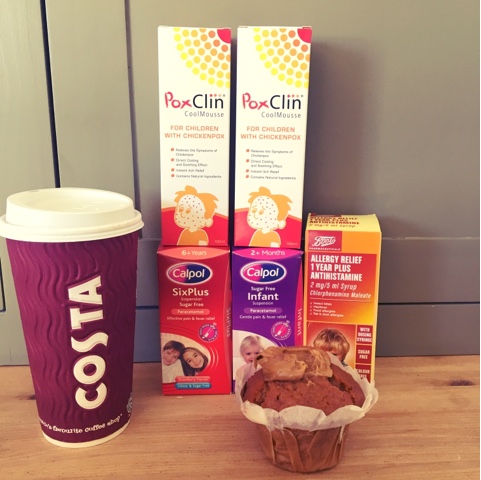 Our Easter Half Term fun really has been thrown out the window.
I can't wait for them to be feeling better because these f***ing pox suck!