This Easter I've teamed up with The Co Op to celebrate the #GoodEggs in our lives. 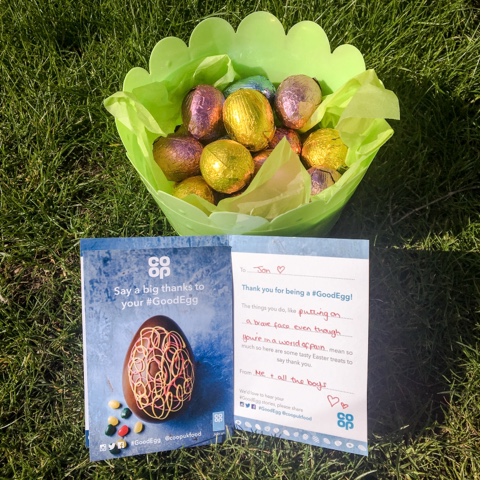 My Good Egg is Jon.

Because every day he wakes up in immense pain, pain so bad that I can't even imagine how bad, but yet he puts on a brave face for me and the boys and goes about being the best daddy and partner he can be.

He's broken his back twice, has had countless operations, has had disks removed and screws fixed in, screws taken out and now is on the waiting list to have a pain stimulator fixed into his spine.
With the hope that actually takes the focus away.
He could have big surgery again, but the risks out weigh the positives.

Because of his back pain he also suffers really bad anxieties, which make leaving the house a daily battle.
When I suggest doing something out of the blue it will normally end up in a massive argument.
I am learning to be more understanding and try and plan things which I want to do a few days ahead of when I want too.

It's a learning curve for both of us, he's learning to say yes more and I'm learning to be more accepting.

I'm not the most patient person, so for him putting up with me he really is my Good Egg!!!