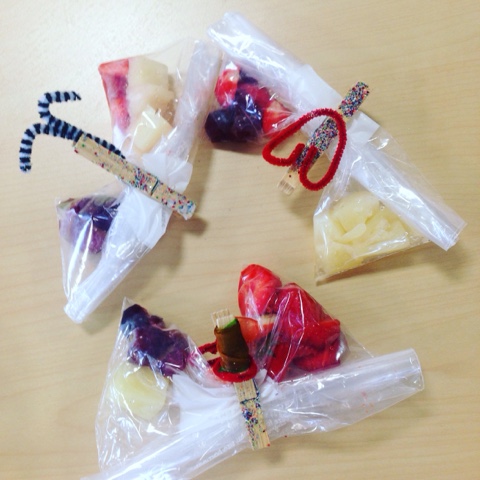 Well I wish I had listened to myself rather than thinking "oh don't be ridiculous, he'll be fine!"

Yesterday I decided to take him and the twins along to a cooking & crafting group in a centre up the island.

The centre was amazing, hands down the best sure start centre I've ever been in.

The group started with everyone making some snack bags. (Photo above)
Everyone including the twins quite happily joined in, everyone apart from Ru.

He was happier walking around the room by himself.
Great I thought, this is fine I can deal with this.

Ru then spotted the amazing pirate boat in the gorgeous garden and was determined to get outside even though it was very close to chucking it down with rain.
The door was locked and I couldn't open it, so he did what he does best and started screaming and smashing his head hard into the floor.
Even though I tried to stop him, he just hit me and carried on.
Everyone stopped and stared.
A staff member came over and said oooh he'll need a cold compress.

After trying to explain to her, that's what he does and we've been told to try and ignore it.
We got "the look" the look I've been trying to avoid ever since I got it whilst out at a soft play with Ru.
When a mum got all concerned he was hurting himself and I was doing nothing to stop it.
When in fact I was but it never works.

The look that says "omg you have no idea what you are doing and that poor poor child has no hope with you as a mother."

I then went on to try to explain that I think he's on the spectrum and that my health visitor is well aware of what is going on.

She eventually opened the doors to let him out, once the doors were open all the children decided to follow suit and head into the cold to play.
None of the parents looked too pleased by this.

When it did eventually start to pour all the children minus Ru headed inside.
Ru was having too much fun shutting and opening the play house door.

When we finally got him in, I don't know what came over me but I just couldn't hold back the tears.
They flew out of my eyes, I had no control over what was happening to me.

Still the looks kept coming which made the tears keep flowing I wanted to scoop all three boys up and make a run for it.

After standing in the toilets to compose myself I headed back to the room for the last half hour.
The twins were having a great time and even Ru was having fun in his own little way.

I think the last few days had really caught up with me and made me a little bit over emotional.
Ru's behaviour just doesn't seem to be getting any better no matter what I do.
The boys are all scared of him, he hits me, he hits them, he even hits our neighbour.
He's getting more interesting "quirks" as the days go on, I don't want to change him at all I just need the support of the family.
No one seems to be taking me seriously and they're all just sugar coating it, thinking he'll grow out of it, or that I'm not parenting him the same way I do the other boys.
I only know one way to parent and that's not working with Ru.

I'm finding it so hard to deal with him at the moment, so much so that I'm looking into getting him into nursery.
But then is that just the easy way out????

Some days I really feel as though I've failed him.