September 15, 2015
You join Finn, his best friend Emmie and Estravon the assessor on the search for Finn's father.
Who just so happens to be on the infested side.
To find his father he needs to find a map ..... But what map and where is it???

Darkmouth - Worlds Explode is the follow on from the first Darkmouth book written by Shane Hegarty.

Shane was a journalist and editor with The Irish Times, but left to be a full time writer after Darkmouth became a global publishing sensation. He lives with his family near Dublin. 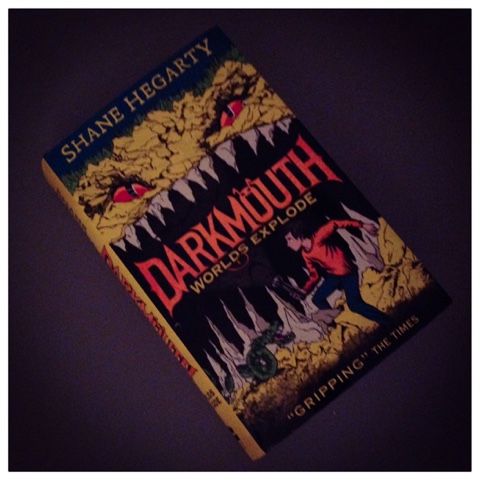 Noah enjoyed this book so much he never wanted to put it down, and i have to say the feeling was mutual!

We were on the edge of our seats dying to find out what was going to happen next.

The book captures you straight from the get go!
It has everything a boy could dream of reading about,  adventure, monsters, gateways to other worlds and mystery of the unknown.

Finn being an ordinary kinda boy, other than the fact he is a legend hunter in the making really helps young boys connect to the character.

*** "You teamed up with a Legend to go on a quest across the infested side." "Yeah, but I'm still worried the Orthrus is just bringing us somewhere so they can do terrible things to us," said Finn.
"You've defeated legends."
"Kind of run away from them mostly," admitted Finn. ***

Noah read this book mostly all by himself with only a little help from myself.
He is such a great reader and I'm so pleased he finds as much joy in books as I do!

We are both looking forward to what Shane has in store next!!

I highly recommend this book!!!

If you fancy joining Finn on his adventure, you can buy it over on   Amazon.
You can follow Shane on Twitter @Shanehegarty