GynaeCheck - the new three second Cervical Cancer screen you can do in your own bedroom!!!

September 01, 2015
Each year in the UK, 3,100 women are diagnosed with cervical cancer, but the disease is largely treatable if caught early. 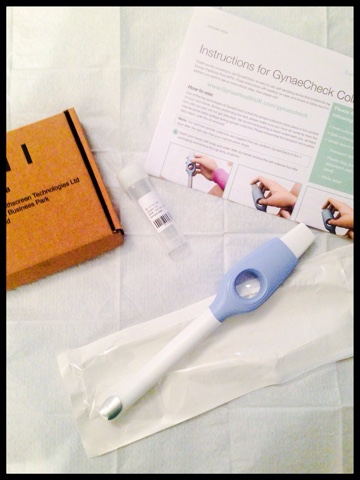 The GynaeCheck detects the presence of
HPV and therefore the women at a higher risk of developing cervical cancer.

This revolutionary test can be done in the privacy of your own bedroom, and it literally takes 3 seconds!!!!

If you get results back that there is HPV present in your sample you will then need to book in for a smear, if not you can carry on as you are!

Smear tests  can be scary and make you cringe but they are extremely important and we need to make it the "norm" that really it already is!! We just need to stop thinking of it in the wrong way!
I'm sure you don't generally talk openly to your friends about smear tests....not with out someone screwing their faces up!

I have been having smear tests since the age of 18 (why?? I still have no idea!!)
My first test came back abnormal as did the following two. After my 3rd abnormal result I was then referred the the GynaeClinic at the local hospital which resulted in me having colposcopy - loop biopsy!
After that I had another smear and the results were normal.
I now have to have my tests yearly..... You would think after having all that I would religiously get checked but...No, I have still been avoiding them like the plague!

My last one was when Noah was around 1yrs old, he's now nearly 8!!!
So two weeks ago I gave myself a pep talk and took myself off to the doctors to get my long over due smear!
I thought it would be great too compare both results.
Doctors vs DIY check.

The smear really wasn't as bad as I remembered!
Yes it's a little embarrassing..... even more so when there is a student nurse helping out and before she inserts the dreaded plastic speculum she says "we're going in"
I didn't know whether to cry or laugh!
My results came back normal!!
No more worry until next year!
I've posted off my DIY GynaeCheck and should have my results back within 10 days!

The GynaeCheck is ideal for busy women who don't always have the time to pop to the doctors, I know I find it difficult to get a spare moment when it's just me and the boys at home!

The device collects a fluid sample from the cervix which is then sent to a laboratory to be tested for the high risk strains of HPV.

GynaeCheck is a HPV detection    programme that women are recommended to have every 2 years!

'The device has been used safely and effectively by over 30,000 women across the world.'

In line with the national screening programme, the device is available to women aged 25 and up and can be ordered online for £129.

You can find out more over on the GynaeCheck website :: www.gynaehealthuk.com